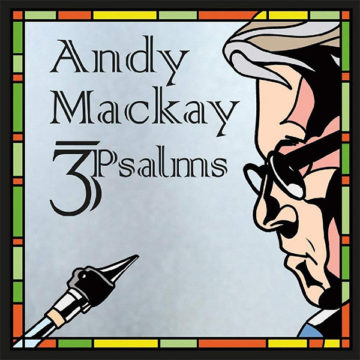 It has been almost ten years since Andy Mackay has released a solo album (his last solo offering being London! New York! Paris! Rome! credited to Andy Mackay + The Metaphors was released in 2009). Now with Roxy Music looking less and less likely to reform any time soon, Mackay has been able to finish a project he started in the 1990s. That project is the very ambitious and very brilliant 3 Psalms. Joining Mackay for this album are Phil Manzanera, Harry Day-Lewis (vocals) and the Czech National Philharmonic Orchestra, and many more. The end result is one of the most beautiful, challenging and engaging albums of the year.

The album is broken into three movements, “Deep” (Psalm No.130), “Refuge” (Psalm No. 90) and “Praise” (Psalm No. 150). There is a fourth song, “Interlude”. From beginning to end, the album takes the listener in and does not release them until the last beautiful strands of “Praise”, which ends the album. It is beautifully recorded and arranged, and the melodies glide in and out as the album unfolds. Although the album is based on the “Book of Psalms” from The Bible, there is more to this, much more.

Mackay’s musicianship has never been better, and at times he is downright inspirational in his performance. His saxophone fits in beautifully and it defines the sound of the . The album, although based in classical music, is not a classical work in the strict sense of the word. It is more experimental if anything, 3 Psalms has shades of prog rock, and alternative rock woven throughout. The vocals and choir arrangements tend to lean towards an oratorio, but make no mistake, this is Mackay’s vision and his sound. In that sense, it escapes classification.

The work is incredibly moving, with the theme of the album starting at questioning and ending in praise or hope. It is a theme that most would be able to identify with and a theme that is not tied strictly to The Bible. In fact, it can been seen as a religious piece or not, depending on your own personal view.

Mackay has been working on this project, off and on, for over twenty years, and it has finally been recorded and released. It is a stunning album, one that Mackay has every right to be proud of. Over the past few years, Mackay has had his own health issues and successes outside of music, and all of that despair and joy is reflected in this work. It is simply an astonishing piece. Mackay, who has earned a Theology degree, incorporates the original words from The Psalms, even using Hebrew and Latin, and setting them to music befitting of the words. It works on many levels.

3 Psalms is one of the most original works to be released this year, and is an album that will grow in stature over time. It is also an album that needs to be listened to as an album. Sit back, and listen to this remarkable work in its whole.

Born and raised in Whitby, Aaron discovered music through his love of The Beatles. This led to a career in radio, writing for various publications, and ultimately a radio show about The Beatles (Beatles Universe), which ran for over four years. When not immersed in music, Aaron enjoys spending time with the loves of his life -- his wife Andrea, and daughters Emily and Linda (all of whom have an intense love of music too).
RELATED ARTICLES
3 psalmsalbum reviewalbum reviews