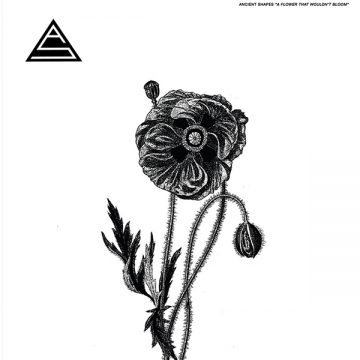 Daniel Romano is a very busy guy. He has published books, he is part owner of a very cool record label, video director, and he has a very successful solo career. Along with releasing a lot of music on a yearly basis as Daniel Romano, he also has a side project, Ancient Shapes. A Flower That Wouldn’t Bloom is the third full length album by Ancient Shapes and the albums just keep getting better and better. A Flower That Wouldn’t Bloom is, by far, their best album.

Ancient Shapes consists of Daniel Romano, David Nardi, Vee Bell, Roddy Rosetti and Ian Romano.  Together they make a glorious noise. To my ears it is the old style of punk. When I use the word ‘punk’, in my mind I am thinking of bands like The Buzzcocks. Ancient Shapes does not sound like The Buzzcocks, but their songs are loud, yet melodic.

The songs burst out and are over long before you could possibly be tired of the song. Hell, the longest song, “To Be Touched”,  is 2:33, while the majority of the songs hover around the two-minute mark. It also makes for a short album, which in this day and age is refreshing. No doubt Romano has a hundred more songs, but he keeps it to a tight, brilliant 13. He does not need to fill a double album. For this band, that seems to be the point.

Lyrically, Romano moves effortlessly from the politics of the heart, to hometown tributes such as in “Welland 2020”, Indigenous Peoples issues as in “Reconciliation Nation Now”) and other issues plaguing the average citizen. But because it is Daniel Romano, there is the sprinkle of humour and some healthy cynicism. Again, that is what makes this album work, strong lyrics and excellent musicianship.

Ancient Shapes is an extension of Daniel Romano. He has formed a solid band and the end result is a stunning album. Perfect in almost every way. His production is flawless and he has set the bar very high for other bands in the power pop/punk genre. A Flower That Wouldn’t Bloom is the album that will be played years from now as an example of this genre of music.

Born and raised in Whitby, Aaron discovered music through his love of The Beatles. This led to a career in radio, writing for various publications, and ultimately a radio show about The Beatles (Beatles Universe), which ran for over four years. When not immersed in music, Aaron enjoys spending time with the loves of his life -- his wife Andrea, and daughters Emily and Linda (all of whom have an intense love of music too).
RELATED ARTICLES
album reviewalbum reviewsdaniel romano
7.0