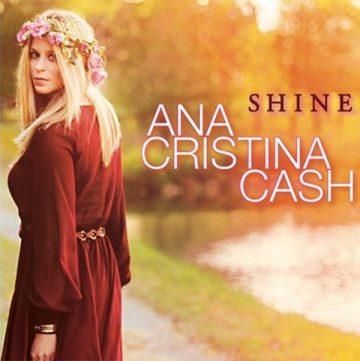 Ana Cristina Cash has had a very diverse career up to this point. This album, Shine, is her first album since 2018’s My Christmas Collection, and her third entirely English language one. As Ana Cristina, she had established herself in the Latin Music World, but as she is now based in Nashville, she is expanding her repertoire. Shine is an album that is as diverse as Cash herself. This album is a creative fusion of Americana, country, pop, and jazz. The end result is a wonderful album full of twists and turns.

Shine benefits from some very strong writing and collaborations. Cash has written songs on her own previously, however on Shine, “Tug Of War” is the only song she has written alone. It is a great slice of country-pop.  However, when she writes with other artists/writers such as Bill Miller and Kevin Dunne, she demonstrates her ability to move in and out of other genres with ease, and she is able to tug at heartstrings. Listen to “Broken Roses”, which she wrote with both Miller and Dunne as well as her husband, John Carter Cash.

Produced by John Carter Cash, the only child of Johnny and June Carter Cash, the album has a very consistent flow and feel.  He also co-wrote some of the songs in this collection, including one of the highlights, “Southern Roots”. Ana Cristina Cash also co-wrote a song with her father-in-law Johnny. John Carter Cash has published a book of Johnny Cash’s unfinished lyrics/poems, Forever Words: The Unknown Poems. Some of those poems were set to music by various artists. A second volume has been promised, and one of those songs will be “Brand New Pair Of Shoes”.

Cash is not afraid to tackle covers. The two on the album are not only great choices, she handles the songs beautifully. She makes John Anderson’s “Seminole Wind” her own, and The Everly Brothers’ “Dream” is exquisite.

Overall, Shine is an album to explore and enjoy. It grows on you and each time you listen to it, something new seems to grab your attention. John Carter Cash has certainly done an excellent job producing his wife. They should both be very proud of this album.

Born and raised in Whitby, Aaron discovered music through his love of The Beatles. This led to a career in radio, writing for various publications, and ultimately a radio show about The Beatles (Beatles Universe), which ran for over four years. When not immersed in music, Aaron enjoys spending time with the loves of his life -- his wife Andrea, and daughters Emily and Linda (all of whom have an intense love of music too).
RELATED ARTICLES
album reviewalbum reviewsana cristina cash
8.0