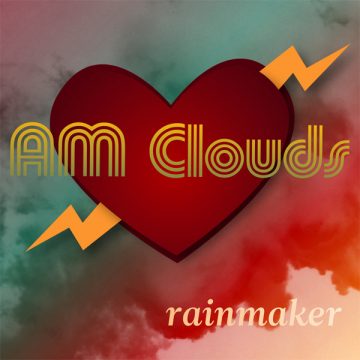 Is it OK for a band to re-create a certain musical vibe? That is the question that immediately comes to mind as soon as “Paradise” kicks in, the second track on Rainmaker, the new album by Oregon quartet AM Clouds.

Well, the answer to that question depends on two things: whether it’s a good vibe or one that you like, and whether or not they do a good job. Straight off, AM Clouds do their vibe justice! That is, if you like that late ‘80s early ‘90s sound created by the second phase Replacements, Meat Puppets, and Uncle Tupelo. That was such a good sound that many bands have failed at. But Bruce Troy Moon and his bandmates don’t slip up anywhere to be heard here. Whether, it is the aforementioned “Paradise”, “The Velvet Rope” or the title track. Any here for that matter.

Part of the credit certainly goes to the producer, Jeff Stuart Saltzman, who did the same job for the likes of The Black Keys and Death Cab for Cutie, but it is the AM Clouds that drive the show here and they do it with aplomb and style.

The constant debate about originality in pop/rock music falls flat here, as the band know exactly what they’re doing and why. And they do make you look at your record collection to see where all those Replacements albums are.