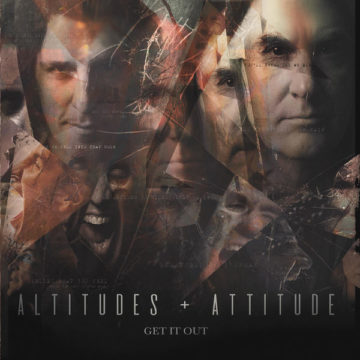 Altitudes & Attitude
Get It Out
Megaforce Records

Get It Out is the second release and first full-length album from Altitudes & Attitude, a collaboration between Frank Bello and David Ellefson, bassists for Anthrax and Megadeth respectively. After releasing a self-titled three-track EP in 2014, the duo develops its sound with ten new songs (in addition to the three from the EP), which will likely surprise long-time fans of these trash metal icons and pioneers.

Opening with the incredibly strong title track, Altitudes & Attitude goes full throttle with a sinister riff, a blistering punk pace, a series of incendiary lead guitar lines, and a catchy chorus which could easily be sung by a crowd of head-banging fans. On the following two tracks, “Late” and “Out Here”, Altitudes & Attitude distances itself even further from thrash metal with its blend of hard-hitting rock and pop sensibilities, ultimately leading to highly melodic and polished vocal lines.

All that being said, Altitudes & Attitude is at its best when using a grittier and heavier approach. Exercises in mainstream rock songwriting like “Slip”, “Tell the World”, and “Another Day” do pay off, but the band truly shines on “Here Again”, “Leviathan”, “Part of Me”, and “Talk to Me”. In particular, “Leviathan” and “Here Again” stand out. On the former, progressive instrumentals and a moody atmosphere develop from an acoustic guitar solo, only to be ripped up by fiery dual guitar lines. Get It Out closes with its most traditionally metal song, “Here Again”, which was taken from the debut EP and includes a relentless pulse, killer solos, and incredible bass lines. With “Get It Out” and “Here Again”, the album is bookended by its strongest material.

Ultimately, Get It Out is a strong and proper debut for a band which gives a pair of metal titans the opportunity to experiment with songwriting and performance in a modern hard rock context. While it may not be quite what fans had in mind—sharing little musical territory with Megadeth and Anthrax—it is nonetheless worth getting excited for, and will surely keep Ellefson and Bello busy between their main projects. Over the course of its thirteen songs, Get It Out captures a drastically different side of Bello and Ellefson, but it is certainly welcome as they indulge in crunchy riffs and catchy choruses. Currently, Altitudes & Attitude are booked for a European tour through late February into March, and I look forward to seeing what else is to come from them throughout 2019.

A passion for music has always been a part of Gerrod’s life. As a young boy, he was raised on a steady diet of the music from The Chili Peppers, Aerosmith, The Stones, Prince, and others from his mum. Raised in the GTA, Gerrod continued to foster his love for music by attending a wide range of concerts and learning the drums. His unapologetic passion for music has no bounds and has spread to a wide variety of styles, whether it be the 90’s rock that sound tracked his teenage years, the jazz he studied in university, or his newfound love for hip-hop. He recently received his bachelors in music and education from York University and is passionate about writing and reviewing good (and less than good) music. Gerrod is also the drummer and songwriter for a Toronto based rock & roll band, One In The Chamber.
RELATED ARTICLES
album reviewalbum reviewsaltitudes & attitude
8.0