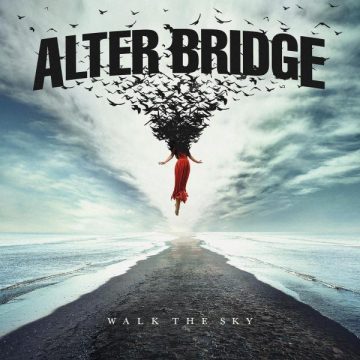 Alter Bridge has found themselves in a precarious position with their latest release, Walk The Sky. Over the past three years, the band has cemented themselves as one of the most premier modern rock bands with a string of three releases. The first, 2016’s critically acclaimed studio album The Last Hero proved their worth in the studio while 2017’s Live At The O2 + Rarities captured the thrill of their live show with a truly impressive amount of unreleased studio material. Lastly, 2018’s Live At The Royal Albert Hall documented an incredible concert where the band was backed by the 52-piece Parallax Orchestra. Now, Alter Bridge seeks to follow up a remarkable run with Walk The Sky, a strong hard rock record that has big shoes to fill.

Walk The Sky opens with the ambient and brief intro track, “One Life” before diving headfirst, with little warning, into the relentless lead single, “Wouldn’t You Rather”. Cheesy, uplifting lyrics aside, this track absolutely rips hard as it combines strong melodies with heavy and fresh riffs. Similarly, the same could be said about “Native Son”, another track where vocalist Myles Kennedy brings the metal heavy instrumental, led by guitarist Mark Tremonti, to more of a rock context. This was done similarly on “Take The Crown” and the incredibly heavy and dark “Indoctrinate”, which very well may be the best and most unique track on the record, as well as “Clear Horizon”, and the closing songwriting master-class, “Dying Light”. There is no shortage of heavy, unrelenting riffs that are distinctly that of Tremonti and Alter Bridge on Walk The Sky.

Despite a number of great hard rock bangers, there are a number of tracks that, while good, simply do not measure up to the same level of excitement and intensity of the tracks mentioned previously. Tracks like “In The Deep”, the synth-heavy “Godspeed”, “Walking On The Sky”, and “Tear Us Apart” stand as strong examples of songwriting and performance from the band, but they fall closer to a generic sound reminiscent of the 2000s rather than pushing forward into uncharted territory as Alter Bridge tends to. It is clear in the case of Walk The Sky, Alter Bridge is at their strongest when they’re at their heaviest.

Ultimately a solid album, Walk The Sky feels like a lateral move rather than a forward progression like much of their work from the past three years. Alter Bridge certainly deliver on what they’re known for – hard hitting modern rock performed at a level simply above most of their peers, however it will not challenge or exceed your expectations of the band. That being said, Walk The Sky will likely remain in my rotation for the next few weeks, as I assume the same for most fans of Alter Bridge, but afterwards, I will likely fall back onto their previous records. While there are certainly a number of gems in the fourteen song track list, Alter Bridge would have had a far more successful, engaging, and exciting release should they have cut it down by a few tracks.

A passion for music has always been a part of Gerrod’s life. As a young boy, he was raised on a steady diet of the music from The Chili Peppers, Aerosmith, The Stones, Prince, and others from his mum. Raised in the GTA, Gerrod continued to foster his love for music by attending a wide range of concerts and learning the drums. His unapologetic passion for music has no bounds and has spread to a wide variety of styles, whether it be the 90’s rock that sound tracked his teenage years, the jazz he studied in university, or his newfound love for hip-hop. He recently received his bachelors in music and education from York University and is passionate about writing and reviewing good (and less than good) music. Gerrod is also the drummer and songwriter for a Toronto based rock & roll band, One In The Chamber.
RELATED ARTICLES
album reviewalbum reviewsalter bridge
7.0