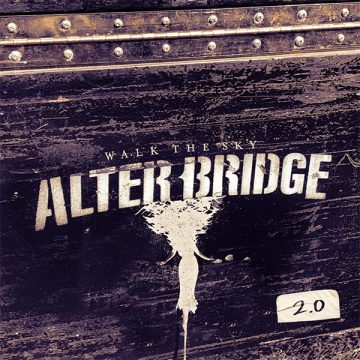 Having released Walk The Sky last year, Alter Bridge embarked on a short-lived North American tour in January and February of this year. Salvaging what they could from the canceled tour, the band has returned with Walk The Sky 2.0, a seven-track EP consisting of six live tracks and one brand new studio track. Their six live recordings – all of which are from Walk The Sky – make for their first live collection since 2018’s stellar Live At The Royal Albert Hall.

Opening with “Last Rites”, the new and only studio track on the EP, Alter Bridge kick off Walk The Sky 2.0 with a full throttle track that pulls the listener in immediately. The heavy track opens with distorted rhythmic chugging and opens up into a spacious and dissonant verse where vocalist Myles Kennedy brings in a juxtaposing melody. The chorus only grows from there with Kennedy’s vocals soaring above the hard hitting instrumentals; however, it is the bridge section that is truly jaw-dropping as it seemingly comes out of nowhere and hits like a sledgehammer. In many ways, “Last Rites” exemplifies the very best of Alter Bridge as one of the greatest modern rock bands from the last two decades.

Of the six live tracks, Alter Bridge have assembled some of the strongest material from Walk The Sky, making for a truly exciting EP. As always, the band is beyond tight and incredibly precise in their execution. Despite the abundance of live albums the band have released – especially in the last few years – Alter Bridge never seem to get enough acclaim as the stellar live band that they are. Walk The Sky 2.0 stands as yet another testament to the musicianship between all four members as they blast through blistering tracks like “Native Son” and “Wouldn’t You Rather”, along with hard rockers “Pay No Mind”, “In The Deep”, and the closer “Dying Light”.

Adapting to the constantly changing year we’ve all had, Alter Bridge have salvaged their canceled tours and, given their typical non-stop schedule, likely studio sessions with Walk The Sky 2.0. The seven-track EP acts as a strong live record, but truly stands out through the ferocity of “Last Rites”. Hopefully serving as a taste of what is to come, “Last Rites” should leave all fans of the band excited for the heavy direction Alter Bridge will likely take on their next album.

A passion for music has always been a part of Gerrod’s life. As a young boy, he was raised on a steady diet of the music from The Chili Peppers, Aerosmith, The Stones, Prince, and others from his mum. Raised in the GTA, Gerrod continued to foster his love for music by attending a wide range of concerts and learning the drums. His unapologetic passion for music has no bounds and has spread to a wide variety of styles, whether it be the 90’s rock that sound tracked his teenage years, the jazz he studied in university, or his newfound love for hip-hop. He recently received his bachelors in music and education from York University and is passionate about writing and reviewing good (and less than good) music. Gerrod is also the drummer and songwriter for a Toronto based rock & roll band, One In The Chamber.
RELATED ARTICLES
album reviewalbum reviewsalter bridge
8.0