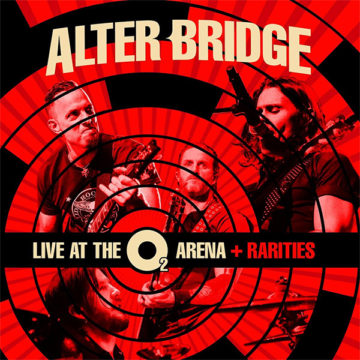 Following the release of their critically acclaimed 2016 release, The Last Hero, Alter Bridge have returned with Live At The O2 Arena + Rarities. The band, consisting of lead vocalist, guitarist, and frequent Slash collaborator Myles Kennedy and- former Creed members- lead guitarist Mark Tremonti, bassist Brian Marshall, and drummer Scott Phillips make for an incredibly impressive band- live and in the studio- and this record is all the proof needed. As the album title implies, the first half of the record was recorded at London, England’s The O2 Arena on November 24th, 2016, one of the band’s biggest shows to date of one of their most successful tours which took the band across North America, Australia, and Europe- including a standout show at Toronto’s Rebel Nightclub. The final portion of the album includes eleven rarities, including songs which were previously released in Japan, along with a handful of songs which, up until now, have never been released.

If you missed Alter Bridge on The Last Hero Tour, then Live At The O2 Arena + Rarities is perfect in the sense that it captures the band at what can be considered their live peak. Their nine-teen song performance is powerful and technically flawless and includes a career spanning set covering classics such as “Metalingus”, “Blackbird”, and “Ties That Bind” along with a significant portion of The Last Hero, including “Show Me A Leader”, the show’s opening track “The Writing On The Wall”, and “Poison In Your Veins” among others. The disc captures a number of highlights that Alter Bridge often include in their live sets, including Kennedy’s solo, acoustic, and heartfelt performance of “Watch Over You”, as well as the climatic performance of “Metalingus”- which included an array of killer lead lines and a stadium sized sing-along. Perhaps my favourite part about seeing Alter Bridge live was how Kennedy and Tremonti weaved their guitar parts together in the sense that rather than have a lead and rhythm guitarist, they simply have two incredible guitarists who manage to integrate their styles together in a seamless and highly impressive manner. This is quite apparent on Live At The O2 Arena + Rarities with all the parts being performed flawlessly on top of the incredibly tight rhythm section of Phillips’ pounding drums and Marshall’s running bass lines, all the while, Kennedy’s vocals soars above as one of modern rock’s strongest voices. Like any Alter Bridge concert, Live At The O2 Arena + Rarities is an amazing display of musicianship and is overflowing with a raw energy that gives it the possibility to one day be considered a classic and quintessential live record from not just Alter Bridge themselves, but also the present era of rock.

Upon listening to the previously unreleased material from the second portion of Live At The O2 Arena + Rarities, the immediate question that arises is  Why were these songs kept under lock and key until now?  While it seems clear that most of the tracks do not have the single quality that some of the band’s most known material possesses, each song is polished, well written and recorded, and nothing short of great. As with any rarities collection, this does not flow as well as a typical album would,- largely due to the songs all emerging from different points in the band’s career- however, it does not stop songs like “We Don’t Care At All”, “Zero”, and “Cruel Sun” from shining. The one thing I wish was more apparent was from which period of Alter Bridge’s career each song came from as it would not only give these songs some musical and thematic context, but it would also make for an interesting comparison between what they chose to release, and what they didn’t along with a a better idea of the creative process from the time. Hopefully the liner notes of the physical copies delve into the histories and stories behind the tracks. Despite this, the eleven unreleased/rare songs make for an excellent listen to and will have fans hopeful that these songs will make their way into their live set. I especially enjoyed “Never Say Die (Outright)” and “Symphony Of Agony (The Last Of Our Kind)” which both quite clearly were outtakes from the sessions that would become The Last Hero.

Live At The O2 Arena + Rarities is an excellent collection for die hard Alter Bridge fans who have seen the band live and have hoped for a live album of this sort as well as a treasure trove of unreleased material. The album also serves as an excellent entry point for new fans as well to enjoy a live album that demonstrates a level of musicianship that can sometimes be absent from many modern rock bands. Live At The O2 Arena + Rarities is a record that sounds larger than life and reaffirms Alter Bridge as the titans of present day rock & roll.

A passion for music has always been a part of Gerrod’s life. As a young boy, he was raised on a steady diet of the music from The Chili Peppers, Aerosmith, The Stones, Prince, and others from his mum. Raised in the GTA, Gerrod continued to foster his love for music by attending a wide range of concerts and learning the drums. His unapologetic passion for music has no bounds and has spread to a wide variety of styles, whether it be the 90’s rock that sound tracked his teenage years, the jazz he studied in university, or his newfound love for hip-hop. He recently received his bachelors in music and education from York University and is passionate about writing and reviewing good (and less than good) music. Gerrod is also the drummer and songwriter for a Toronto based rock & roll band, One In The Chamber.
RELATED ARTICLES
album reviewsalter bridge
7.0