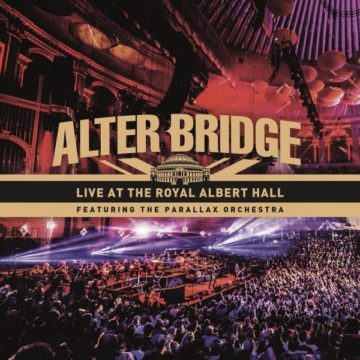 The last few years have proven to be both incredibly busy and fulfilling for the members of Alter Bridge. In 2016, the band released their most recent studio album, The Last Hero, and following a massive and fantastic tour in support of the album, the band released Live At The O2 Arena + Rarities – an in-depth collection documenting said tour while also releasing a vast amount of unreleased tracks throughout their career – in 2017. Since then, lead guitarist Mark Tremonti released his latest album, A Dying Machine, with his self-titled side project, Tremonti, while lead vocalist and guitarist Myles Kennedy made his solo debut with Year Of The Tiger – a thrilling acoustic deviation from any expectations. Now Alter Bridge is returning with what is likely the final chapter of the fruitful saga that is The Last Hero with Live At The Royal Albert Hall, a live album that draws from the band’s two performances at the historic venue in October 2017 where the band was backed by the 52-piece Parallax Orchestra led by conductor Simon Dobson. Much like Metallica’s S&M (1999) and Mad Season’s Sonic Evolution (2015), Live At The Royal Albert Hall is an epic release that stands as one of the best modern live albums there is.

With the opening track, “Slip To The Void”, it is immediately clear that the blend between Alter Bridge’s hard hitting rock and the lush textures of the Parallax Orchestra are a perfect match. The use of orchestra is thick, dense, and perfectly interwoven with the band, allowing for the strings and horns to be subtly present throughout the record adding a rich layer of colour. At times, this addition can sound uplifting (“Before Tomorrow Comes”) while at others, it can add an ominous sense of heaviness that simply cannot be reached by a rock band along (“Ties That Bind” and “Ghost Of Days Gone By”). What is most special about this collaboration is that it only adds to the excitement, energy, and musicianship found at every Alter Bridge concert. This is only furthered when paired with the visuals of the DVD/Blu-Ray which also documents the show, along with behind the scenes footage and interviews with the band, and sold through special edition packages.

As always, Alter Bridge comes across as one of the tightest hard rock bands of their time. Kennedy sings with an emotive voice that is beyond powerful while he and Tremonti trade off lead lines to create a perfectly interwoven wall of guitar where it is nearly impossible to determine where the rhythm line ends and the lead line begins. Truly, if Live At The Royal Albert Hall does anything beyond display the perfect synchronicity between rock and classical performance, is that it captures Alter Bridge in what appears to be a perfect performance. Of the album’s twenty-one songs – running well over the two hour mark – “Cry Of Achilles”, “Fortress”, “Addicted To Pain”, and “The Other Side” all stand out as some of the best hard hitting tracks, while “Wonderful Life/Watch Over You” and “In Loving Memory”, provide a rich sense of balance, showcasing the true versatility of the band.

A passion for music has always been a part of Gerrod’s life. As a young boy, he was raised on a steady diet of the music from The Chili Peppers, Aerosmith, The Stones, Prince, and others from his mum. Raised in the GTA, Gerrod continued to foster his love for music by attending a wide range of concerts and learning the drums. His unapologetic passion for music has no bounds and has spread to a wide variety of styles, whether it be the 90’s rock that sound tracked his teenage years, the jazz he studied in university, or his newfound love for hip-hop. He recently received his bachelors in music and education from York University and is passionate about writing and reviewing good (and less than good) music. Gerrod is also the drummer and songwriter for a Toronto based rock & roll band, One In The Chamber.
RELATED ARTICLES
album reviewalbum reviewsalter bridge
7.0