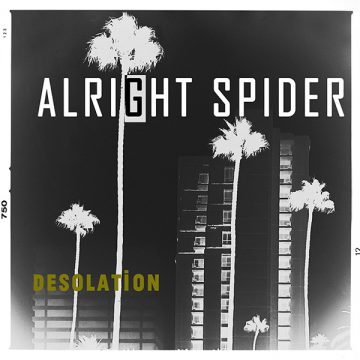 Relative newcomers to the rock scene Alright Spider have released their second album, Desolation. An album that is as much about interactions with people as it is about the lives we live around them, Desolation takes us through a real punk rock soundscape experience. Its raspy grunge vocals, deep and well-thought-out lyricism, and above all, its stellar execution instrumentally tell a sad backstage tale of loneliness and isolation.

While the whole album is an underground treasure in itself, certain raw moments such as “I Meme” and “20 Minutes Late” stand out. Not only are they different from the rest of the tracklisting, they bring a rich punk listening experience to the table. The rather unique approach to the subject matter in “I Meme,” where a narcissist manipulates an insecure romantic interest,and “20 Minutes Late,” that deals with mental health and alcohol abuse, are some of the more rough-hewn moments on the album. They are definitely worth listening to aside from their robust guitar riffs and powerful percussion delivery throughout.

Desolation is one of those albums that is under the radar, but once you listen to it, it becomes apart of your music collection for a long time. Desolation talks about a vast range of important subjects without shying away from the full-bodied punk experience it strives to give fans of this genre. This is a band to watch for if you’re looking for an integrated experience of amazing storytelling through great lyrics and potent instrumentality.