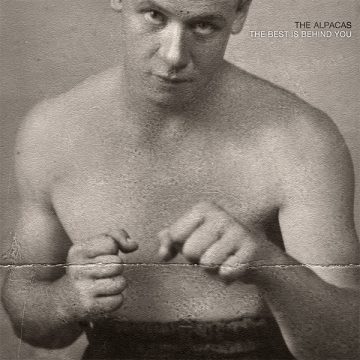 The Alpacas
The Best Is Behind You
Independent

The Best Is Behind You is a reflection of life as a young adult. Living as a 20- or 30-year-old may sound like it’s fun and games, but in between that there’s a lot more to it. There are a lot of learning experiences, longing for the past, and sorting out the future, and with this album The Alpacas really hit the nail on the head.

The Canadian Rockers are from Barrie, Ontario. The band members consist of Greg Lee on vocals, Brent Lee playing the guitar and vocals as well, Brett Garner on Bass, and Drummer Nick Harper. Engineer Kevin Dietz, who also worked with The Cranberries, Alexisonfire, and Nelly Furtado, worked on the album through producing, engineering, and mixing it.

Its songs have that Hard Rock sound and sometimes on the border of Punk-Rock from the late ’90s and early 2000s which, when combined with the band’s relatable lyrics and personable experiences, gives them a sort of nostalgic feeling, as if the band itself were from the late ’90s. The album has the ability to stir up different emotions in its listeners, which is always a nice touch when it comes to music. The track, “The Best Is Behind You” is kind of like a reflection of the past and the need to stop dwelling on it, no matter how good or bad it was. The Steven Tyler-esque scream in “Comb My Hair” is a nice touch to add to the frustration and forgiveness in the particular tune.

“Artifacts” is one of the best songs on the album and a strong way to kick it off. It’s very Hard Rock, very relatable, and again, memories serving as what was of the past. It’s definitely a nod to the good times, acknowledging what was, and, at one point, sounds like a remorseful song about someone from long ago.

The slower but meaningful “Satellite” is a nice way to finish it all. There’s a bit of a Country twang to add to the uncertainty of the future, where things are headed, and generally just being a young adult with so much potential, but not knowing where to put it.

The Best Is Behind You is a great testament to youth, the reminiscing of the past, and the uncertainty of the future.

Music and writing have always been a big part of Sabrina's life. She would "borrow" her dad's rock and metal CDs from his collection and listen to them while going through the art books. Although she doesn't write angsty poetry anymore, she does have a Bachelor's Degree in Journalism which she uses to pursue a creative career path. When she's not writing, Sabrina can be found juggling a coffee cup and DSLR or Instagramming her food.
RELATED ARTICLES
album reviewsbarrie
8.0