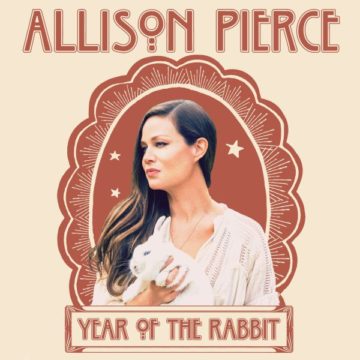 After two decades recording and performing with her sister Catherine as The Pierces, Allison Pierce ventures into new musical territory with her solo debut, Year of the Rabbit.

Produced by Ethan Johns (Ryan Adams, Ray LaMontagne, Kings of Leon) and recorded at Sunset Sound in Hollywood, the album touches on issues of raw human experiences. Pierce showcases her songwriting chops with an effort that explores love, loneliness, mortality, and spirituality.

The complexities of love are a large part of the record. Opener “Fool Him” takes on the burdens of the revolving door nature of a toxic relationship. “Sea of Love” looks at the euphoria of love and the terrifying uncertainty of whether it will last. “Never Look Back” reminds me of “She’s Got You” sung by Patsy Cline, where a speaker looks at the tokens of her past relationship and understands their meanings have changed. Pierce’s speaker reluctantly releases her lover, even though it means she’s alone, “I know it’s set you free and that’s the only way to be/I know there’s nothing that you lack. /No look, no sigh, no kiss goodbye, and I know you’re never coming back.” The speaker moves beyond her desertion by accepting that her partner did not need her to feel whole. This awareness seems to ease her rejection.

“It is Well with My Soul” diverts slightly from the americana sounds of the record, offering a gospel-tinged track that speaks to the gifts and peace of spirituality. While “To The Grave” touches on the inevitability of death. Pierce’s sweet voice strains the morbidity from the song, bringing a slight comfort to the track. There is a sense that the unknown binds us together after our earthly selves are gone.

“Peace Like a River” closes the album with a track that invokes strong natural and animal imagery. The vision of a river and a dove are heavy with metaphor, biblically and in our cultural ethos. The song’s meaning feels slightly elusive, rooted somewhere in the restorative qualities that water and love bring us.

Allison Pierce shows her strength as a solo artist in an album that feels personally drawn, but universal in its scope. The songs tread the line of haunting and heartbreaking with a sincerity reinforced by strong imagery and sound production.