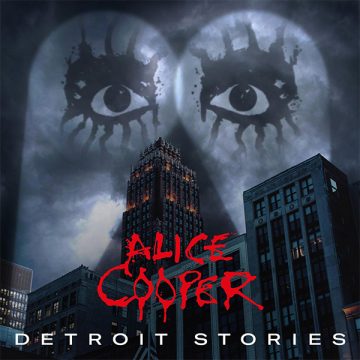 For his 28th studio album, Alice Cooper has returned with Detroit Stories, his first record since 2017’s Paranormal. The album features15 tracks – 11 originals and four covers – including a number of singles that have been released since May of 2020. The lineup includes most of the surviving members of the original Alice Cooper band, along with a star-studded ist of guests that includes the likes of Joe Bonamassa and MC5 founder and guitarist, Wayne Kramer. Without reinventing the wheel, Detroit Stories is sure to be a hit among fans just for the original Cooper reunion, let alone the unrelenting classic rock sound of the record.

Curiously enough, Detroit Stories opens with a cover. “Rock & Roll”, written by The Velvet Underground, takes a half beat swagger to the original up-tempo track that adds a distinct heaviness and groove to Cooper’s cover that immediately kicks off the album with a bluesy, hard rock odyssey. “Rock & Roll” is, without a doubt, the strongest cover, and is one of the strongest tracks on Detroit Stories. Similarly, his covers of the MC5’s “Sister Anne” and Bob Seger’s “East Side Story” are also very strong additions.

Of the original songs on Detroit Stories, there is not a weak entry on the album. While some may meander or feel too middle of the road for a classic rock legend in 2021, there are a number of great songs that live up to some of Cooper’s greatest hits. The sauntering funk, lush horns, and backing vocals of “$1000 High Heel Shoes”, and the stumbling blues of “Drunk And In Love”, demonstrate a deeper level of versatility that has always been an integral, albeit sublime, part of Cooper’s songwriting, while “Social Debris” and “I Hate You” are undeniable rockers. Furthermore, released in May 2020 at the height of the pandemic, “Hanging On By A Thread (Don’t Give Up)” is a melancholic slow burner in tone with “I’m Eighteen”. It comes as a message of hope as Cooper speaks to the many levels of hardship the last year has brought, leaving a spoken message encouraging those in need to contact the Suicide Prevention Hotline, while listing the phone number. The best song, however, is the title track, “Detroit Stories”, a hard-hitting stomper driven by gang vocals over a catchy chorus, tribal drums, and some of the best guitar work on the record.

Cooper takes a step on his latest album that most icons don’t dare to cross: Detroit Stories is a dangerous record that, for the most part, still sees Cooper and company experiment in songwriting and style, while also delivering a top tier recorded performance. This album sounds absolutely massive blasting through the speakers and leaves me excited to hear how a number of these songs will be incorporated into his legendary live show. Through and through, Detroit Stories is an essential addition to Cooper’s discography, worthy of standing alongside his most highly-regarded albums.

A passion for music has always been a part of Gerrod’s life. As a young boy, he was raised on a steady diet of the music from The Chili Peppers, Aerosmith, The Stones, Prince, and others from his mum. Raised in the GTA, Gerrod continued to foster his love for music by attending a wide range of concerts and learning the drums. His unapologetic passion for music has no bounds and has spread to a wide variety of styles, whether it be the 90’s rock that sound tracked his teenage years, the jazz he studied in university, or his newfound love for hip-hop. He recently received his bachelors in music and education from York University and is passionate about writing and reviewing good (and less than good) music. Gerrod is also the drummer and songwriter for a Toronto based rock & roll band, One In The Chamber.
RELATED ARTICLES
album reviewalbum reviewsalice cooper
7.0