3
new
SPILL ALBUM REVIEW: LEE FIELDS – LET’S GET A GROOVE ON
SPILL FEATURE: THINGS WILL BE BETTER FARTHER ON DOWN THE LINE – A CONVERSATION WITH PACIFIC RANGE
SPILL FEATURE: HOW THE STRONG WILL SURVIVE – A CONVERSATION WITH DREW ARNOTT OF STRANGE ADVANCE
Album Reviews
455
Editor Pick
previous article
SPILL FESTIVAL REVIEW: EVER AFTER MUSIC FESTIVAL 2018
next article
SPILL ALBUM REVIEW: RECHORDUROYS - RECHORDUROYS 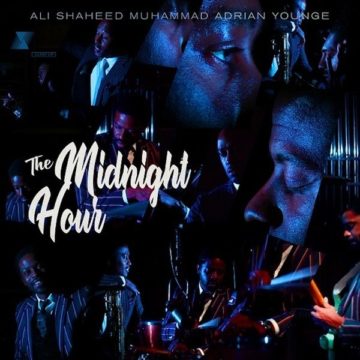 When two production heavyweights like A Tribe Called Quest’s Ali Shaheed Muhammad and Adrian Younge collaborate, it’s something that’s worth paying attention to. That’s what they proved when they worked on Souls of Mischief’s concept album There is Only Now as guest artist and producer respectively, garnering significant critical praise in the process. That’s why, despite the lack of commercial fanfare, their first full album together, The Midnight Hour, has been such a highly anticipated release this year. Especially given the renewed energy that has surrounded the modern hip hop and jazz communities in recent years, with artists including Thundercat, Badbadnotgood and Childish Gambino doing a lot to give that kind of sound more mainstream recognition.

From the start the experience of the two producers is evident. Lush instrumental arrangements, primarily composed of live performances rather than relying on samples, form the backbone of this album. The beat, bass and vocal parts are but parts of the bigger picture, which isn’t much of a surprise when we consider the stylistic tendencies of both artists. Yet the modern developments in music production aren’t forgotten either, with layering and sampling used to expand the sonic landscape of the album without losing the energy or atmosphere of live performance. The result is an album whose melodies and vibe drag the listener back to the previous century while sounding as rich and clear as a Boards of Canada track.

Such attention to detail would be wasted, however, if the songwriting and performances didn’t live up to their part of the picture. The album flows seamlessly through both its instrumental tracks as well as the many songs peppered with guest vocal performances, creating a diverse scenery of emotion that is much more digestible than the record’s 20 song track list would suggest. Tracks like Feel Alive, Possibilities or Questions give their guest vocalists lots of opportunity to add their own two cents to the story while maintaining a consistent vibe and progression with the instrumental tracks (as well as with each other). Yet the individual songs aren’t compromised for the sake of the album either, with most tracks being good enough to be worth listening to on their own.

If there’s any criticism to be given to the album, it’s that you get the feeling they could have gone even further with their experimentation. It certainly feels like the album stays within a comfort zone, even if Ali and Adrian do at times push the boundaries of their sound. The absence of more rhythmic, lyric based vocals is noticeable throughout and it feels like the production side of things could have been more prominent, even if it was well executed nonetheless (though the melodic style of the vocals hardly took away from the experience either).

Yet by staying focused on the sound that they built on this album and making sure they don’t overdo it, the duo have managed to create a record that, more than any other recent release, captures the heart of soul, blues and jazz as they are today. The legacy of modern artists like those mentioned earlier, as well as the likes of Yussef Kamaal or Kamasi Washington, is audible throughout, while paying homage to the live setting from which their musical heritage originated. The Midnight Hour goes above and beyond contemporary releases in its ability to capture the purity of its influences and to tell the next chapter in the story of modern hip hop and R&B. It’s a bit sad knowing that it won’t get the attention that it deserves, but that does nothing to undermine the beauty of the experience.

Based in Montreal but raised across Western Europe, Andrew feels at home both everywhere and nowhere. Having picked up the piano at age four, he has since gone on to add clarinet, saxophone and guitar to his musical arsenal. As well as crafting music, Andrew spends a lot of time listening both at home and in live contexts. Rather than focusing on a particular style or calibre of artist, he is keen to explore music of any shape or size. Outside music, Andrew's passions lie in philosophical writing, visual art and sharing positivity with the world around him.
RELATED ARTICLES
album reviewalbum reviews
7.0