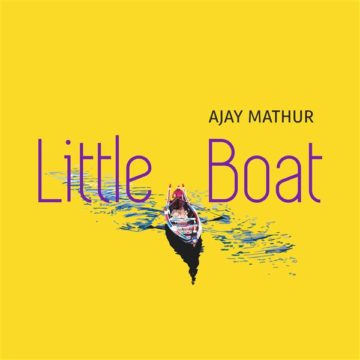 Every musician has their strengths and weaknesses; this typically dictates what type of music they make. It’s simply human nature; people are unique. Tom Waits will never make a squeaky clean pop song and the world is a better place for it. However, Ajay Mathur refuses to be pigeonholed and on his newest release Little Boat, he tries out many different vibes. As a result the album reaches extreme highs and lows. While Little Boat surely has something for everybody it may be tough for listeners to stay along for the entire genre switching rollercoaster ride.

Little Boat is loaded with charm. Mathur’s vocal delivery and musical compositions inspire Neil Young levels of charm and character. “Here’s The Love’s” huge chorus and “Forget About Yesterday’s” quirky introduction are great examples of this. However, the track “All Your Thoughts” is by far the album’s standout. The mixture of harmonica and tin whistle works out like chicken and waffles; it’s a combination that might not sound attractive in theory but it sure produces delicious results in practice.

Lack of direction and over production is what hurts Little Boat. It sounds as if Mathur has tried to make a song in every genre he can think of and by the album’s end his creativity is spread too thin. “Who’s Sorry Now,” comes out of nowhere with a Middle Eastern drum circle vibe. It is followed by “Time For Deliverance,” which is driven by the blues and soul. Finally, the album ends with “Kartehuus” which is sung in a different language than the other songs on the album. These curveballs may have been more enjoyable if the production wasn’t so squeaky clean throughout each song. Each worldly tune sounds like it was recorded in one studio, using the same effects and it’s enough to throw any listener off. It’s like adding a variety of spices to a meal just to sanitize it with rubbing alcohol before serving.

You can’t blame an artist for taking risks and trying new things. However, they are called risks for a reason and unfortunately the ones Mathur chose to take on Little Boat stop it from firing on all cylinders. Given a little more focus Mathur could use his unique voice to make a heart-stopping album in the future. Meanwhile Little Boat is worth a listen even if it reeks of untapped potential.