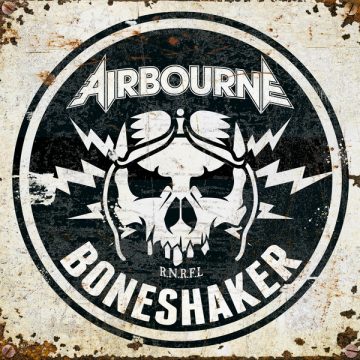 Australian rockers Airbourne display raw musicality, catchy guitar riffs and entertaining lyrics on their sixth studio album Boneshaker. Following in the footsteps of compatriots such as AC/DC, Jet, and Karnivol, Airbourne’s approach to songwriting is sincere, powerful, and dynamic.

Produced by Nashville producer David Cobb, Boneshaker attempts to capture the essence of Airbourne’s live performance in a controlled environment. Recorded at the historic Music Row Studio, the band sought inspiration from the classic sound of the late ‘70s. Airbourne challenged themselves to make a record focused on energy and spotless performance, avoiding perfectionism and pushing analog gear to the limit.

Cobb described the record as pure rock ‘n’ roll and right from the get-go the homonymous opening track showcases vigorous guitar riffs and memorable vocal tracks in the style of Bon Scott. A low-frequency ramble kicks thing off on the follow-up tune “Burnout The Nitro” which contains a compelling chorus that resembles the soundtrack of movies such as Dazed & Confused and Almost Famous.

Similar to their live show, the album flows from start to finish without sounding repetitive and stale. Highlights here are “This Is Our City”, “Backseat Boogie”, and “Blood In The Water” where the extensive vocal range of lead singer Joel O’ Keefe takes center stage.

Boneshaker might not change your life but nevertheless is a visceral, pure, and energetic collection of songs that sounds unpretentious, genuine, and lively. In times where music is becoming disposable and losing cultural importance, Airbourne delivers an album with the potential to become a hard-rock classic in the foreseeable future. Time will tell.