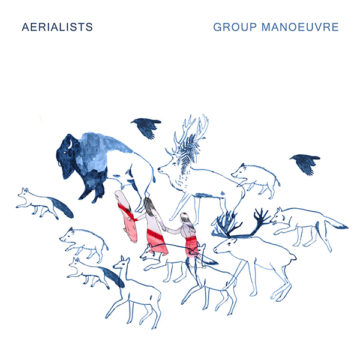 This past summer, I saw Aerialists perform for the first time, watching as they took the stage at Guelph’s Hillside Festival. I was immediately struck by their arresting stage presence and apt musicianship. They exuded confidence as they played, honouring Gaelic and Nordic musical traditions, while simultaneously evoking a fresh sensibility.

Their amalgamation of sounds, which borrows from an array of genres (alt-roots, folk, indie, Celtic and rock to name a few) is beautifully represented in their debut full-length album, Group Manouevre. Over the album’s eight tracks, entire worlds seem travelled, vividly drawn through a complex sound.

The “prog-trad” band is comprised of members from Canada, the United States, and Scotland, and features an impressive instrumental smorgasbord of fiddle, harp, guitar, bass, and drums. Even though most of the songs are without lyrics, the Aerialists still manage to carve out stories in their tracks. There is a sense of urgency, lightheartedness, menace, and stillness, all conveyed in the movement of the strings and the beat of the drums. (There are exceptions, for instance the dreamy vocals in Group Manoeuvre II and in the energetic “Foxhunters/Jessica Winter’s”).

Opener and title track “Group Manoeuvre” starts things off with a punch: a powerful and layered sound that incorporates alt-rock and indie sentimentalities. It’s followed by “Ink Black Ocean”, which offers a more subdued sound, that narrows its listeners into a deep focus state. The tracks that follow continue to tread this line, with gorgeous interludes, fierce harmonics, and biting rock riffs keeping its listener on their toes.

The album closes with a cover of Bon Iver’s “Halocene”. With the beautiful vocals of Emily Millard, and spellbinding instrumentation, the ambitious cover is a gorgeous and haunting end to the album. The beauty and precision of their interpretation is also a testament to the Aerialists’ musical prowess, and to the confidence and individuality of their sound.

Group Manoeuvre is an album that engages its listeners through its employment of curiosity and play, and its willingness to build upon established musical traditions. It is a feat of exploration and effort that you don’t want to miss.

Elizabeth is a Toronto via Caledon writer whose rural upbringing left a lasting love of anything with a banjo and an upright bass. She scours Toronto venues for both the musical talent and the beers on tap.
RELATED ARTICLES
album reviews
9.0