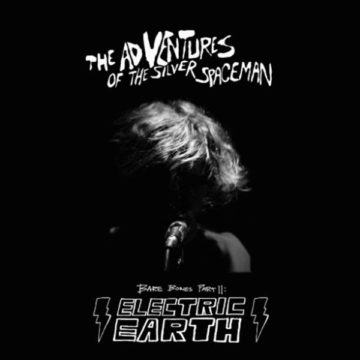 Bare Bones Part II: Electric Earth is the highly anticipated sequel to last year’s Bare Bones Part I: Oxygen is Flowing Although the Bag May Not Inflate. As the second release in this series of psychedelically tinged EPs, it continues the auditory experimentation that fans have come to expect from The Adventures of the Silver Spaceman.

Behind that exceptionally long, retro-futuristic band name, is Brooklyn-based songwriter and multi-instrumentalist Zachary James Ellis. Joining him on this EP are members of other Brooklyn acts Haybaby and Lazyeyes. We even get to hear from DIIV guitarist Andrew Bailey, as he guests on the closing track, “Breath of Fire (Reprise)”. Together these musicians craft a rather intricate blend of psychedelia and post-punk. Stylistically we get a taste of many bands and eras, ranging from The Doors’ Strange Days, to distorted, modern post-punk. As Ellis is the former drummer of Haybaby, he does carry some of his previous stylings and tonal qualities over to this recent release.

As these five tracks roar along over the course of five minutes, you are treated to a trip through Ellis’ creativity and adventurous musicianship. His lyrics can get very introspective and inquisitive, yet keep you entwined, as he varies from nearly mumbling to screaming intensely. On tracks like “Weather King Part II”, you get to hear a fairly relaxed indie rock sound, as his lightly distorted and jangly guitars blend with Ellis’ rambling lyrics.

The Adventures of the Silver Spaceman bring a DIY aesthetic to the world of psychedelic and post-punk music. Whether you’re in the midst of an instrumental break, or one of his verses, Ellis and his musical compatriots have crafted an exceptionally interesting album.

I am an Edmonton based musicophile and photographer who loves experiencing music whether it's live or on my turntable. I play seven instruments and go to a lot of concerts.
RELATED ARTICLES
album reviews
7.0