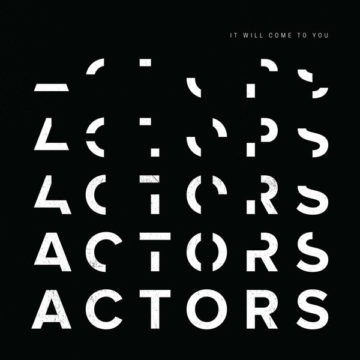 Actors
It Will Come To You
Artoffact Records

Vancouver-based Actors is one of the latest to wave the post-punk flag with pride. Having made their debut in 2012, Actors are already making waves taking the stage at such stand out festivals as Terminus in Calgary. Their latest release It Will Come to You features tracks that are sure to be dance floor mainstays for years to come.

Listening to It Will Come to You on repeat leaves me, for one, dancing around my living room, and for a second, trying to pinpoint which other bands Actors reminds me of. I can’t quite place it but I know I’ve danced to this sound before. Actors’ sound fits snugly in the synthwave genre thus leaning heavily towards ‘80s synth pop influences. Tracks like “Face Meets Glass”, “Bury Me”, and “Hit to the Head” are definite standout tracks off the album that give distinctive hints of bands like The Cure and New Order.

Both the band and the album are ones that had to grow on me rather than become instantaneous favourites. It took a few listens before the album that I felt was catchy but not fully attention grabbing finally took hold on me. Not every song on the album are ones that I love – I can’t get into “Crosses”, the distorted repetitive vocals just grate on my ears. But the tracks I’ve fallen for have that driving infectious beat that’s hard to stay still to.

I’m a fan of any electronic-based band that still features live instruments rather than relying solely on digitized beats and Actors delivers just that. From a friend who saw their performance at Terminus last year, Actors deliver a solid set that got the crowd to their feet which is enough for me to want to be in the audience of one of their live shows as well.

It Will Come to You is turning into an album I know I’ll gravitate to repeatedly. Though not every song is a standout for me, there’s enough solid content in there that has solidified me as a fan.

Samantha is both a writer and a fan of the arts and has been able to find numerous ways to pair the two. Eager to dive head first into writing for Spill, Samantha is an avid partaker and reviewer of live art in Toronto serving as an editor at Mooney on Theatre exploring live local theatre, she's a photojournalist for Been Here Done That, a travel, dining and tourism blog that focuses on Toronto and abroad and previously for Lithium Magazine. She's passionate about music, theatre, photography, writing -- not necessarily in that order. She drinks tea more than coffee, prefer ciders over beers, and sings karaoke way too loudly. You can follow her on various social media including Facebook, Twitter, and Instagram.
RELATED ARTICLES
actorsalbum reviewsartoffact records