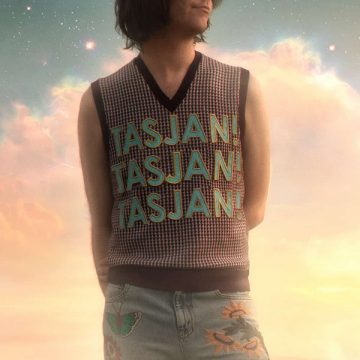 Aaron Lee Tasjan is certainly a name that is somewhere in the back of the memory files of music fans. After all, as his official biography describes, he went from “his glam rock roots, when Jimmy Iovine told him ‘guys in make-up don’t sell records’ and when Lady Gaga would open for his band in NYC, to his legend-hopping guitar sideman days, Tasjan has traveled the globe, ‘collecting road war tales from doing mushrooms with Bono in Ireland, to bowling with Yoko Ono, and partying with Kate Moss in London.’

But how does that reflect on his music, particularly on his latest album, Tasjan! Tasjan! Tasjan!?Very much so. Wherever he goes stylistically, Tasjan obviously has that velvet touch with both melody and arrangements, by picking and choosing elements from over the place and making them sound as they should always been together. Think Traveling Wilbury’s with Petty, Dylan, Lynne and Harrison in full force, with Orbison not lagging behind too much, song-wise.

But Tasjan doesn’t emulate each and every one of these legends separately, instead fusing them into one personality that can do it all, melody, vocal harmony and excellent instrumentation. “Up All Night” being a perfect example.

Aaron Lee Tasjan shouldn’t just be interesting for the stories he could tell from his personal journey, but for an excellent album he has come up with in Tasjan! Tasjan! Tasjan!.

Formerly a lot of things, including a journalist and a translator, currently a freelance writer living in The Netherlands.
RELATED ARTICLES
album reviewalbum reviewsnew west records
8.0