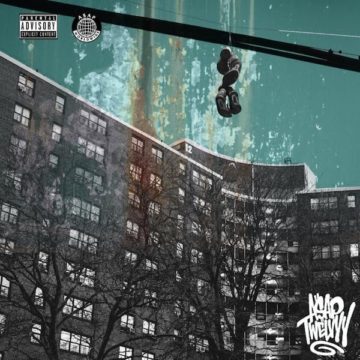 Rapper A$AP Twelvyy finally steps out from the Bronx-based A$AP Mob after a decade or so of being in the background to release his first album under his own name – or at least, under Jamel Phillips’ stage name, appropriately enough using the area telephone code for Harlem but making it flow.

The result is as harsh and urban, dark and brooding, as you would expect. From ‘Diamonds’, the single which also features A$sap Rocky (other members of the A$AP Mob also help out on other tracks – Ferg, Ant and Nast), and which has incisive and insightful lyrics taking aim at the new generation of gangsta rappers.

This is not old-skool but it’s close enough for most lovers of real rap looking for something new. Flatbush Zombies also crop up of course following his work with them over the last few years and 2016’s tour,. Joey Bada$$ and Fredro Starr also help to maintain that New York approach. Sometimes, as on the surprisingly melodic ‘Strapped’, the approach can be pretty much classic hip hop, and there are a couple of street skits adding to the vibe. This is New York rap, proudly so, unmistakably so, and it is so good to hear it.

The Spill Magazine is a Toronto-based online publication dedicated to covering the independent music scene with a strong focus on our thriving hometown talent. Our writers bring you up-to-date news, in-depth features on musicians and reviews for the latest CD releases. We also travel to the front lines for all local festivals including Canadian Music Week and North by Northeast.Don’t forget to check out our Facebook and Twitter pages for all daily Spill updates.
RELATED ARTICLES
12a$ap twelvyya$ap worldwide
7.0

by Brian Capitao on February 15, 2019
Bedstudy Dot Wave EP Grand Jury Music Dot Wave EP is the first project from Brooklyn trio, Bedstudy, who are looking to make modern electro-R&B with an indie-pop flare. The group has [...]
8.0

by Gerry Young on April 6, 2018
Sloan 12 Murder Records/Universal Music Sloan is one of those Canadian bands I’ve always liked, so I was looking forward to hearing their 12th album, fittingly titled 12, and featuring 12 new songs [...]