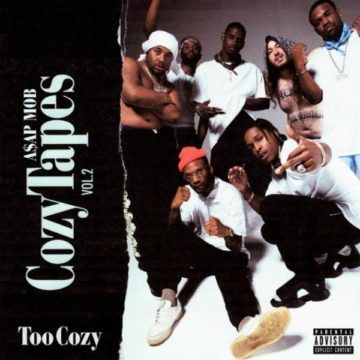 A lot of people have been waiting eagerly for this, the second studio album from A$AP Mob, and although it might not quite always hit the heights, they won’t be too disappointed. A$AP Mob position themselves right in the middle of the current hip-hop universe, but the sheer number of guests – Big Sean, Lil’ Yachty, Frank Ocean, Jaden Smith, Joey Bada$, Chief Keef, Lil Uzi Vert, Flatbush Zombies and many others, sometimes has the unfortunate effect of deflecting the attention from the main act. Instagram celebrity critic Donterio Hundon sets out the stall with ‘Skool Bus’ (Skit), and then it is into the album proper. A$AP Rocky excels on ‘Get The Bag’, Yachty goes with the flow on ‘Bahamas’, and A$AP Twelvyy shows the form that made his own recent album such a real pleasure on ‘Coziest’; take a listen too to his rap on ‘FYBR (First Year Being Rich)’, alongside A$AP Ant. Then the crew really show off their style on ‘What Happens’, for me the best track on the album. Though some of the the beats are pretty interesting, there’s not really anything cutting edge here, or anything to push hip hop forward. But for the current state of play, this does the job just fine. Have a great life, and stay cozy!

The Spill Magazine is a Toronto-based online publication dedicated to covering the independent music scene with a strong focus on our thriving hometown talent. Our writers bring you up-to-date news, in-depth features on musicians and reviews for the latest CD releases. We also travel to the front lines for all local festivals including Canadian Music Week and North by Northeast. Don’t forget to check out our Facebook and Twitter pages for all daily Spill updates.
RELATED ARTICLES
a$ap worldwidealbum reviewsbahamas
8.0