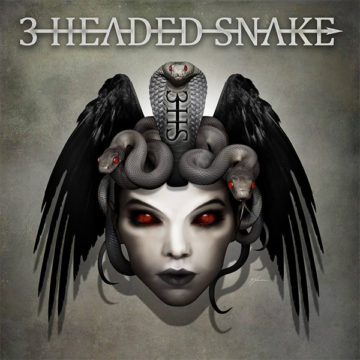 Old school metal fans will love 3 Headed Snake’s self-titled album. Fans of industrial metal band Ministry will instantly recognize Sin Quirin’s face-melting guitar, but those who enjoy the epic vocals in the stylings of Iron Maiden will appreciate vocalist Johnny Ray. His ability to sound menacing and then to simultaneously crescendo into the high notes is superb, and there is a fair balance between the  instrumental solos and vocals, so neither wholly dominates the songs.

“Wisdom Screams” is the debut single from this three-track album and it is, in a word, incredible. Seemingly a comment on modern life, it’s hard to ignore lyrics like this: “We live in a time where anything goes, but where do we draw the line?/Society has become a disease, we have become darkened, inside!”

Beginning with the ominous keyboard and the drums rolling like thunder on the horizon, “Wisdom Screams” features the best elements of this band. Like staring into a fire, the music is both entrancing and menacing, and with Ray’s vocals the song brings to mind the epic metal ballads that sadly are rarely heard these days.

Overall, the only complaint about this album is that three tracks are not enough. If you love metal music in any of its forms, then 3 Headed Snake’s album is one for you.

Samantha “Sam” Stevens is half a music journalist, and half an academic scholar. With a graduate diploma and MA in Journalism, Sam has covered musicians all over the world and her work has appeared in Guitar Girl magazine, North Bay Nugget newspaper, The Link newspaper, and a few others. She even founded and managed her own music blog The Littlest Voice for 5 years, in which the spotlight was thrown on new and emerging indie artists around the globe. Currently, Sam is a PhD student at Carleton University in the School of Indigenous and Canadian studies where she is continuing her MA research on colonial language in Canadian news and government institutions.
RELATED ARTICLES
3 headed snakealbum reviewalbum reviews
8.0