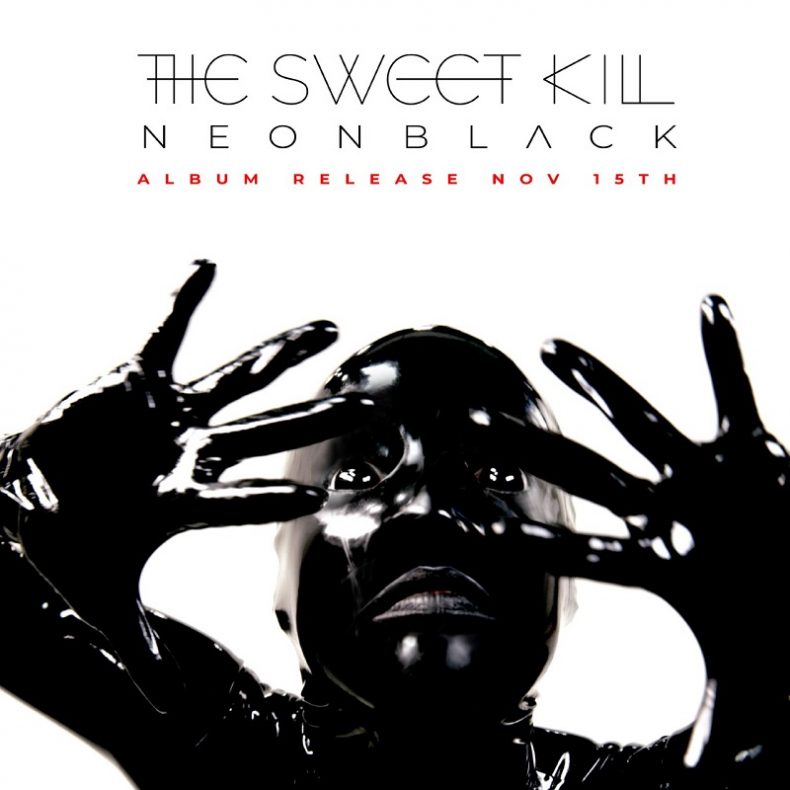 The Sweet Kill premieres a powerful collection of songs that pay homage to ’90s electronic rock. Neon Black is the band’s debut album, that comes after the release of their Love & Death EP earlier this year.

Recorded by Canadian musician Pete Mills in his LA studio, Neon Black is an upbeat aggressive throwback to electronic rock at its finest. The album has a diverse collection of anthems including “Break Me Out” designed to create an adrenaline rush. “Down in Flames” has a punk spirit, with sharp drums and an appetite for destruction. Another highlight of the record is The Sweet Kill’s industrial take on Bob Dylan’s classic “Masters of War”. Neon Black‘s provocative lead single, “Night Terror Creeper”, was released on October 31 along an impacting BDSM-inspired video. The short movie, directed by the late cinematographer Jamie Mitchell, features extreme dancing and executed choreography, juxtaposed with a helpless straight jacket-bound Pete Mills (lead singer and composer of the band) while an actual live panther snarls and paces back and forth.

Prior to the conception of The Sweet Kill, Mills has had an extensive career in the music industry, signing with Nikki Sixx’s label for a period with his former band Flash Bastard. Ultimately moving to Los Angeles, Pete diverged into a producing career, beginning with a co-production credit for Soulkid1’s smash hit song “We Got More Bounce in California” with Michael Patterson (Black Rebel Motorcycle Club). This single’s notoriety captured the attention of local labels which transitioned Pete into a successful producing career working with a myriad of artists including Sheryl Crow, Moving Units, and Teddy Riley to name a few. These latest releases from The Sweet Kill solidify Pete Mills’ comet-like re-entry back into performing.

Neon Black is out now in all streaming and digital platforms on Friday. The band will be also having the album release party at Bar Sinister tomorrow, Friday November 16.

“Neon Black has been a long time coming. After playing live around Los Angeles I pooled from the energy of the crowds I was playing to. This album is a myriad of emotion, aggression and angst reflecting the Hollywood world in which I live in.”  ~Pete