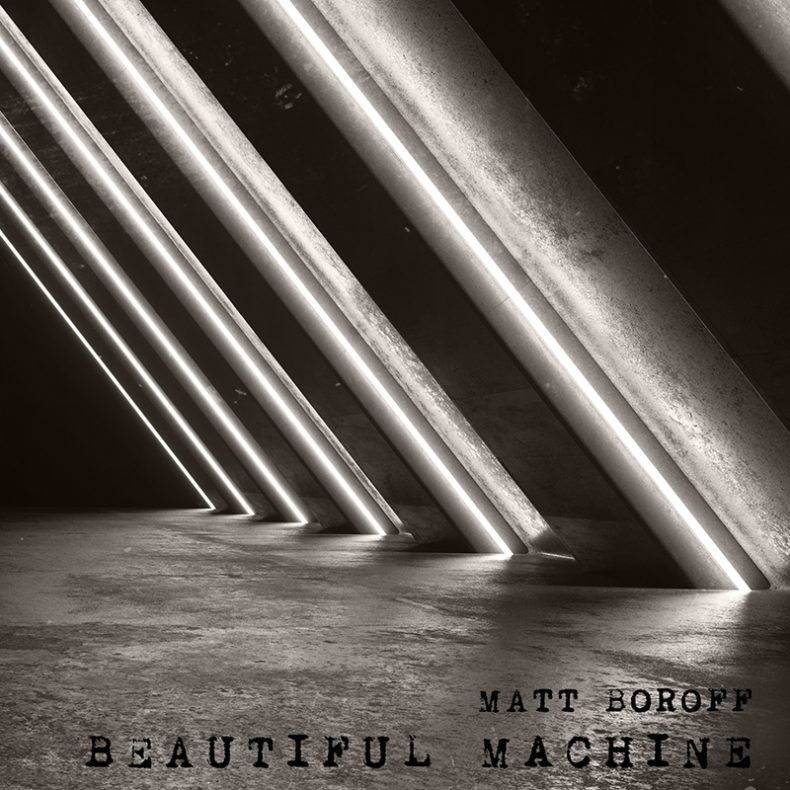 Not many musicians continue to evolve and expand the boundaries of their craft after more than 20 years of recording and performing. But Matt Boroff has never been the type to settle into a comfortable groove and produce the same record over and over. Boroff has always had an uncanny ability to conjure layered musical environments that feel cinematic in scope. Boroff exemplifies this on his forthcoming album Beautiful Machine, due out January 29, 2021. Over a decades-spanning career during which he’s shared the stage with such respected acts as Nirvana, Queens of the Stone Age, BRMC, Calexico and Kyuss, just to name a few, this multi talented singer, songwriter and guitarist has continually pushed his music into new and exciting directions, from blistering post-punk to windswept, desert-tinged soundscapes, waves of ambient noise—and now, on his latest boundary-blurring solo release, pulsating, groove-laden electro-cinematic rock. But wherever his muse takes him, this restless veteran artist retains a knack for vivid lyricism, imaginative guitar work, hauntingly powerful vocals, and an uncompromising vision of music as a means of stirring the soul.

On his fourth full solo album, Beautiful Machine, the American-born, Austria-based musician and songwriter takes that ability to a new level. Over the course of 11 vivid tracks that run the gamut from pensive reflection to cathartic intensity, he pulls listeners into a modern-day free fall of uncertainty. It’s an urgent, immersive experience that perfectly reflects the turbulent emotional journey of the last few years while confronting the circumstances that brought us here.On his latest, Beautiful Machine, Matt Boroff swaps his trademark guitar sound for electronic textures to paint a compelling portrait of life in our current cultural moment of hyperreality.

That won’t be news to fans of Boroff’s fully realized soundscapes on solo albums like Reaching for Sparks, Sweet Hand of Fate and especially 2016’s gorgeous Grand Delusion. What may take listeners by surprise, however, is the absence of Boroff’s familiar guitar-driven aesthetic, replaced by hypnotic bass lines, drum machines, Moog synthesizers and other electronic sounds that create a fertile backdrop for his expressive baritone and nuanced lyrics to roam.

“This album is intended as a kind of snapshot of the moment we’re living in right now,” Boroff says. “It’s an emotional reaction to where we’ve landed as a culture, both here in Europe and in the U.S. Technology continues to blur the line between fact and fiction. Our everyday lives are moving into a state of hyperreality. We’re increasingly unable to tell the difference between reality and the world being reflected back at us through our technology.

“I see my role in these songs as that of an emotional weatherman giving a forecast of the current climate,” he continues. “And I just had the feeling that clothing them in guitar-based textures wouldn’t have served to support the ideas they’re exploring. The subject matter directed me to move out of my comfort zone and take a different approach that I felt was more suited to what’s happening today.”

The results of that artistic decision are as striking as any of his past efforts, either as a solo artist or with his previous band, the Mirrors. That’s evident from the pulsing groove of the opening title track, which reflects on the seductive power and “perfect isolation” of social media, smartphones and the rise of A.I., with Boroff intoning “I don’t need human touch/ I don’t need conversation/ I need a beautiful machine.”

Boroff likens the album to a season of the anthology series Black Mirror, with each song, like an episode of the show, examining a different facet of humanity’s relationship with technology. “The thread that’s running through the record is that our own machines are changing the way we relate to the outside world and each other,” he says. “And where is that leading us?”

Our increasingly isolated and polarized existence recurs in songs like “Echo Chamber” (“In this echo chamber talk is cheap/ The truth won’t set you free … Your little voice cannot be heard … And the wheels of fire keep rolling”), while “Trust” takes a scathing look at a culture that prizes winning above all else, and the closing “Future Crimes” bemoans a populace “guilty of paying no attention to anything longer than a soundbite.”

The album also features Boroff’s wife, Marion, who provides piano and backing vocals, not to mention writing the basis for the hauntingly absorbing instrumental interlude, “Reverie.” Mixing assistance is handled by Boroff’s longtime engineer and partner Martin Biegger. Their contributions add depth and color to one of Boroff’s most vibrant and immediate works, one that grapples with a fundamental shift in our culture.

“I think the present moment is the new normal,” Boroff says. “It’s a kind of evolutionary free-fall. I’m not simply interested in pointing fingers or rooting for a particular side, and I’m not offering any kind of solution, like I’ve got it all figured out, because I definitely haven’t. I’m just attempting to hold a mirror up to age-old struggles that are taking place in a forum that’s both new and strange.

“Grand Delusion was like somebody pointing to dust clouds gathering on the horizon,” he continues, “while this album is someone’s reaction to being shrouded by them and wondering how they’re going to keep their humanity intact.”

“The album was my way of holding up a mirror to this moment in time. It’s gotten more and more difficult to draw a line between the real-world and the one that lives in our technology.”