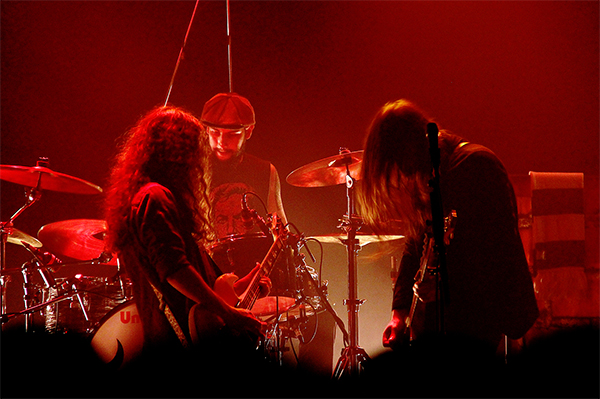 Uncle Acid & the Deadbeats descended on Toronto for their second tour of duty on September 17 to an eager mixed crowd of metal heads, stoners and hippies. This was in contrast to last year’s Lee’s Palace crowd, which consisted purely of metal heads. Clearly Uncle Acid has reached a larger audience since their first North American tour in 2014 and with the recent release of The Night Creeper.

Setting the stage for Uncle Acid was a fantastic band out of Philadelphia called Ruby the Hatchet, a female-fronted doom metal band who clearly impressed the 500 or so concertgoers. I was lucky enough to pick up one of their records and can comfortably say I’m a now a big fan.

When Uncle Acid hit the stage, the first thing fans noticed was this tour’s upgraded stage setup; it was remarkably better than last year’s Toronto show when they played in the dark. The biggest improvement was the stage lighting; we could actually see the band this time. For The Night Creeper tour, the set consists of lampposts and bricks creating somewhat of a downtown London England aesthetic.

Musically, Uncle Acid was as tight as ever, crushing all their songs with surgical flawlessness. Surprisingly, they didn’t play their new album from front to back but instead played songs from all their releases. Ripping through tunes such as “Waiting For Blood,” “The Night Creeper,” “Poison Apple,” “Cut You Down,” and even “Runaway Girl,” they surely gave the crowd their money’s worth. Uncle Acid saved the best for last when they came back for their encore and blew the joint up with a smokin’ rendition of their latest big single “Melody Lane,” throwing the crowd into an inebriated frenzy and ending the night off right.

As the North American tour chugs through Canada and the U.S., Uncle Acid & the Deadbeats will keep building momentum and picking up more fans worldwide. I can’t wait to see what 2016 has to offer.

Andre has been writing for The Spill Magazine for over 12 years, dating back to the print days. His passion for music goes far beyond writing reviews for new music and live concerts, he is also an active musician and producer on the Canadian music scene. Having toured North America and Europe with various acts, he is no stranger to dedication and work ethic new bands must endure to make the grade in today's market; Andre always delivers perspective writing that is authentic and to the point. Mr. Skinner typically covers indie rock, grass roots, electronica and is our resident hard rock and heavy metal specialist. He is extremely selective on what bands he covers for articles and you can rest assured they are ALWAYS band to watch with something left of centre to offer.
RELATED ARTICLES
the phoenixtorontouncle acid & the deadbeats

by Greg Kieszkowski on March 11, 2016
Monster Truck w/ The Temperance Movement @ The Phoenix, Toronto March 11, 2016 We all stood there by the end of a very long evening, ankle deep in sweat and spilled beer, [...]