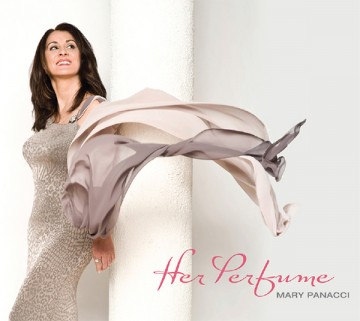 On a beautiful spring Tuesday night, the Jazz Bistro was packed with friends, family and jazz fans alike to witness charming vocalist Mary Panacci’s CD release. From the looks of the repertoire and the title of her CD, Her Perfume, it was a night celebrating love, romance, and timeless music from various parts of the world.

Under the careful direction of Mary’s husband and pianist Anthony Panacci, they led an all-star band (Ted Quinlan on guitar, Mike Downes on bass, Kevin Dempsey on drums and Kelly Jefferson on saxophones) and its special guests through well-executed arrangements (courtesy of Shelly Berger) and soaring performances that tug on one’s heart strings and treats the music as a collective family affair.

Things started off strong, opening with “A Beautiful Friendship.” The spirited arrangement effectively merges Mary’s sunny, spirited vocals with the lively swing of the backup band, and Quinlan took a very cool and melodic solo to give the music a good start. Mary’s voice was angelic and romantic in “Double Rainbow” while she and her band took us to sunny Brazil, singing about one of the world’s beauties. This tune even had a fine Stan Getz-influenced sax solo contributed by the great Kelly Jefferson. From the get-go, Mary’s voice was full of life and charm, making the music very welcoming to the listener.

In celebration of the CD release, Mary invited three special guests to share the stage with her, adding their special touch to the CD Release celebration. First, there was the violinist Drew Jurecka who brought a classy, European gypsy-tinge to songs like “I Wish You Love” and “La Vie En Rose.” Smooth jazz crooner John Alcorn joins the fun with Mary for a romantic take on the standard “How About You,” sounding like a perfectly matched couple roaming around the streets of New York. Last but not least, Mary invites her daughter and fine jazz singer Natalie Panacci to swing through the standard “Almost Like Being in Love,” and take us to the Brazilian beaches in the classic “The Girl From Ipanema.” Natalie’s vocals showcase a huge jazz sensibility, and she is creative with her scat singing and melodic duets with her mother.

Aside from the familiar tunes she did in the evening, Mary made room for selecting repertoire that was fresh, adaptable, and not often heard in the jazz context. “Love Dance” serves as a beautiful love ballad; it is well arranged and performed by Mary with her vocal delivery, and the band backed her up with sensitivity and support. The Italian/French song “Love is Stronger Far Then We” showcased the splendor of Italy through Jurecka’s violin playing, and the pleasant surprise of Anthony bringing out his accordion to add an old-school Italian touch to the piece. The title track “Her Perfume” is a driving blues number that opens in 5/4 and then swings in 4/4, allowing Mary to show off her sassy soulful side to go along with a romantic evening.

The Panaccis have put together a winning formula that celebrates love and beauty from various aspects of the world. Mary’s vocals are so inviting and endearing that she made the audience want to be a part of her family, and her backup band for the night knew how to both let go and hold back at the appropriate times to make the music more effective. The concert was an effective, successful way to celebrate a momentous artistic achievement from beginning to end.

Conrad Gayle is a jazz pianist, composer, and writer. He released three albums, "Genesis EP", "Foundations" and "The Live Sessions 09/10", his first book "The Real Conrad Black", has an active YouTube channel and maintains his own blog site called "The Conrad Gayle Review". He is a graduate from York University with a degree in sociology. He is also active in the city of Toronto as a solo artist and leader of his own trio, as well as being the regular pianist in his home church. He has written for the Spill Magazine for over four years and is planning on continuing the course to become a very successful writer.
RELATED ARTICLES
jazz bistrolive reviewstoronto

by Conrad Gayle on April 30, 2015
The Alex Goodman Chamber Quintet @ Jazz Bistro, Toronto April 30th, 2015 On what would be the first of three nights at the Jazz Bistro, rising star jazz guitarist Alex [...]