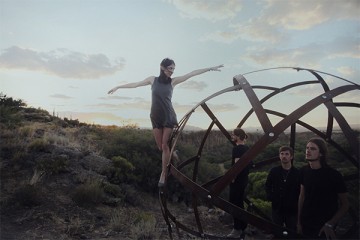 While the freezing winter winds chilled everyone to the bone, Hundred Waters heated things up with their haunting, vibrant, and melodic performance at Lee’s Palace. The setlist consisted of songs new and old, with hits like “Innocent” and “Murmurs.” The pit filled in slowly at first, but come time for the band to perform, there wasn’t a lot of room to move. One or two hundred people filled the room. Fans from all sorts of walks of life were there – an Irish man who lived on 10 acres of land as a child, three women – one of whom had a shrill voice and would loudly gossip about friends, a couple hiding up in the back corner who didn’t talk much to each other.

Opening act Suno Deco came onstage, removed his shoes, and gave a short and humble introduction of himself and commented on how tough Torontonians are during winter. He performed with as much energy as a one-man band could, belting out his songs with all his might, swaying and bobbing his head, limited as to how far he could go while singing and playing guitar and the keyboard. Using his bare feet, he recorded several drum beats and guitar riffs before playing them back and performed his songs while playing the keyboard, giving the audience a taste of what to expect before actually playing. 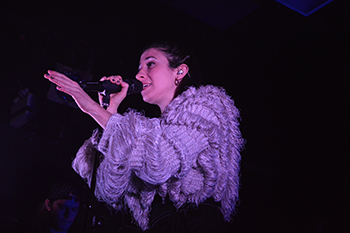 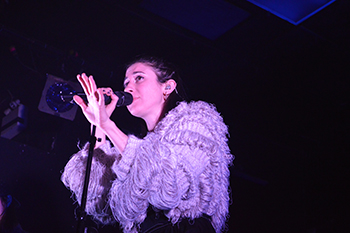 After the 10-minute delay, Hundred Waters came on stage, opening with “Out Alee.” The crowd cheered as the band performed with energy from all four members. The Los Angeles band was on point with their performance, never missing a beat, and was better than expected – they sounded much better live than on their album.

Every now and then between songs, vocalist Nicole Miglis softly thanked the crowd before sipping water. She danced to songs through stiff movements in time to the drum or bass beats, mostly by bending her knees and walking around the stage. Keyboardist and bassist Trayer Tryon bobbed up and down while playing, but moved around the stage a bit while on bass. Paul Giese, guitarist and keyboardist, didn’t move other than the bobbing despite his instruments. It’s unusual, but it worked. 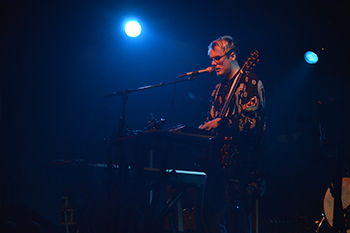 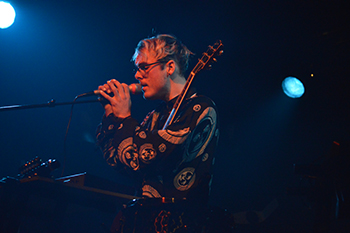 Unlike other major bands, Miglis and the other members don’t interact with the crowd through prompting to sing along or participate in some way. It’s as if they’re just recording another song in the studio, which may have been why the audience was a little more stiff than others.

The closing of the concert with the upbeat song “Animals” was a great touch to the concert by ending it off with a bang, especially since Miglis moved around a bit more.

Music and writing have always been a big part of Sabrina's life. She would "borrow" her dad's rock and metal CDs from his collection and listen to them while going through the art books. Although she doesn't write angsty poetry anymore, she does have a Bachelor's Degree in Journalism which she uses to pursue a creative career path. When she's not writing, Sabrina can be found juggling a coffee cup and DSLR or Instagramming her food.
RELATED ARTICLES
hundred waterslee's palacelive reviews
8.0

by Andrew Smith on January 13, 2017
Bonobo Migration Ninja Tune Are you stuck inside, gazing out the window at the pouring rain? Is a green sunset falling gently over the horizon? Are you lying down in a calm, breezy meadow, while [...]
4.0

Album Review: Hundred Waters The Moon Rang Like A Bell