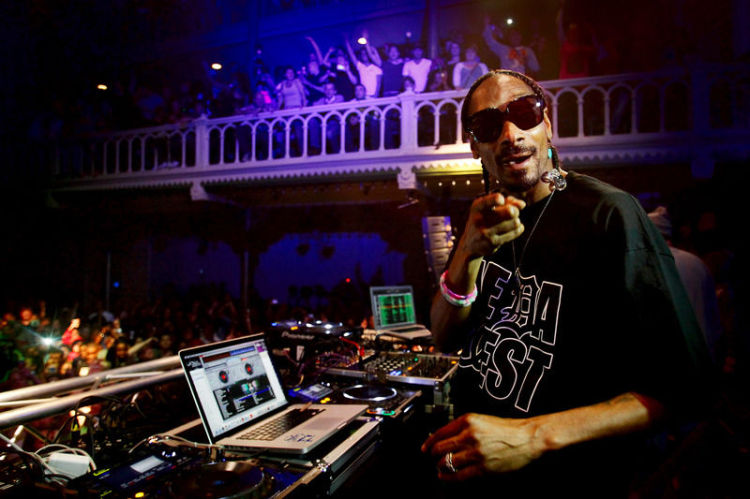 And what a coup it was for Brighton’s only VIP superclub to have Grammy Award-nominated Snoop Dogg, who has sold more than 30 million albums worldwide, play such an intimate two-hour set under his moniker DJ Snoopadelic.

Revellers crammed into Shooshh but had to patiently wait for the superstar rapper formerly known as Snoop Lion and Snoop ‘Doggy’ Dogg. They enthusiastically danced to the warm-up DJs before Snoop finally arrived on stage at 11:30p.m.

Battling the cold British weather he initially took centre stage wrapped up in a black puffa jacket before warming up to reveal his trademark gangsta clothing, complete with a long gold chain round his neck and his infamous statement wraparound shades.

The DJ Snoopadelic show proved to be the perfect platform for the megastar to show off in his own inimitable style by dropping his favourite tracks and exciting the appreciative fans by rapping along to some of his classic hits.

The reformed gangsta, who allegedly smokes 75 marijuana joints a day, was soon puffing on what they call in Jamaica “the good stuff” during his eclectic set and ignoring the stringent UK ban about smoking indoors in a public place.

The global icon, who has hosted several TV shows in the US and appeared in numerous movies, ensured that he immediately got the crowd in party spirit straight from his late arrival on stage with his super laidback delivery that has earned him a place among the greatest ever hip hop recording artists.

The DJ Snoopadelic show witnessed the charismatic legend enjoying being MC and tasting the fruits of nature with his unique rapping style exciting the fans. His hefty entourage cleared the way for a handful of partygoers to briefly get in on the act by having their photo taken with the legend.

It was a true party set, a full two hours of tunes that one of the biggest international names in music weaved together with live vocals over his own famous tracks like “Gin & Juice,” and Busta Rhymes’ “If You Give It To Me.”

It was a safer set than last year’s UK tour when he played tunes for those older than mid-20s with classics like Joan Jett’s “I Love Rock ‘n’ Roll” and Lionel Richie’s “All Night Long.” Obviously DJ Snoopadelic brilliantly read the age of his revellers so stuck to his guns with his favourite cuts from the likes of 50 Cent, Jay-Z and M.I.A. 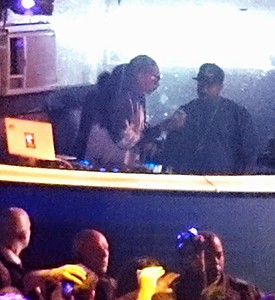 Being so creative and gifted has resulted in Snoop Dogg constantly evolving his sound, including exploring reggae as Snoop Lion when he released last year’s album Reincarnated. He claimed during the promotion of the album that he was the reincarnation of Bob Marley, despite the fact that Snoop Dogg was ten years old when Jamaica’s reggae legend died in 1981.

The innovative and influential artist has superbly remained at the forefront of popular culture and new technology through a clever combination of brand partnerships, philanthropy, several brushes with the law for possession of drugs and a gun as well as being acquitted of a murder charge – but what he ultimately does best is produce hit tracks like “Drop It Like It’s Hot.”

Snoop Dogg appears on the new album Full Court Press Vol. 1, released on De. 9, a project that features contributions from Future, Soulja Boy and T-Pain. The record celebrates the beginning of the new NBA basketball season, with Snoop Dogg a huge fan of his home team the LA Lakers. The album features appearances from high-profile players such as Carlos Boozer, Shawn ‘Matrix’ Marion, Lamar Odom and Iman Shumpert.

The renowned rapper follows up his inaugural visit to Brighton to perform under his pseudonym DJ Snoopadelic at the Bristol O2 Academy (Dec. 11) and the Leeds O2 Academy (Dec. 12) before jetting back to the United States.