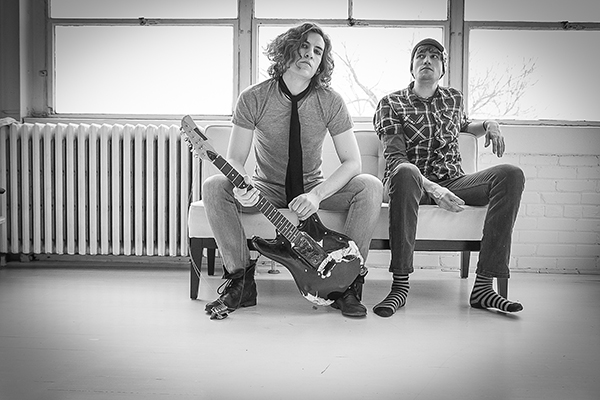 Toronto-based band Secret Broadcast have gained a reputation for their creative, yet low budget videos. So far one of their videos was filmed in a daycare, another at a kitty birthday party at the Toronto Humane Society, and yet another was compiled from iPhone clips of their adventures on tour. So when the boys decided to film the video for their latest single “Killing Time”, simple and creative was the logical way to go. What could go wrong?

The band decided to pack themselves into their stripped down van to perform a live version of the song. Equipped with nothing but three GoPros, a child sized drum kit, and battery powered amps for their guitar and bass, they hit the road in the Toronto suburbs. With Matt at the wheel, bassist Curtis Harding in the front passenger seat, guitarist Will Bennett on an inside wheel well, and drummer Keith Heppler at a child’s drum kit, and just as one might predict — hilarity ensued.

“When we were practicing in the suburbs everyone was exiting their houses to see what the ruckus was” says Matt Lightstone. It’s not every day one gets to see a live band in a van drive down their street. Especially one with such a tall drummer seated at such a small drum kit. “We had a good laugh too. He’s 6’6” or 6’7”, so it was pretty hilarious to see him play on that size a kit.” “Will and Keith kept on falling over during takes. There’s some footage of us going over train tracks and the kit tipping over.”

They performed several takes of the song, but during one of them, just as guitarist Will Bennett finally gets himself into a comfortable position, and the song is winding down to the end, the unexpected happens. A police cruiser pulls them over. The result is priceless, and it couldn’t have happened at a better time in the take. The boys are visibly surprised and perturbed, and the result of the take is classic. You can watch the video below. Of course, I could tell you to fast forward to the end to watch the grand finale, but I won’t, because… well… The song and the video are that good.

Since it was uploaded to YouTube, the video has received nearly 10,000 views. “We’re definitely excited about the reception the video has been getting. It’s nice to get a response like this without a $25,000 video budget.” “GoPro has actually approached us too. They might use the footage.” “We got lucky.”

“Killing Time” is the second single from their debut album Filthy Souls. The album was produced and mixed by Grammy Award winning producer Adam Kasper, who has also worked with Nirvana, The Foo Fighters, Pearl Jam and Queens of the Stone Age. It was recorded at Seattle’s Robert Lang Studios, where Nirvana’s last known recording was made, as well as at Toronto’s The Pocket Studios, and is distributed in Canada by eOne music.

As for the outcome of the ‘incident”, it hasn’t been included in the video, and the boys aren’t telling. We may never know. No doubt it will remain a “Secret Broadcast”. 😉

Trish Melanson lives in the Toronto area with her three boys, Nicholas, Justin, and Eric, her dog Jakkson, and her cats Max and Jagger. She is the former host and producer of Canadian Kickass, a weekly two hour radio show on New Jersey's Chestnut Radio, showcasing Canadian Music. She is also a former Web Content Manager of Indie Soundscapes, an online showcase for Independent Music Artists Worldwide, and was a regular music contributor to The Stroumboulopouli. She is a fervent supporter of the Toronto live music scene. In a past life she was a teacher and Vice Principal in Durham Region. She has many more new and exciting projects waiting in the wings. ;)
RELATED ARTICLES
featuressecret broadcast