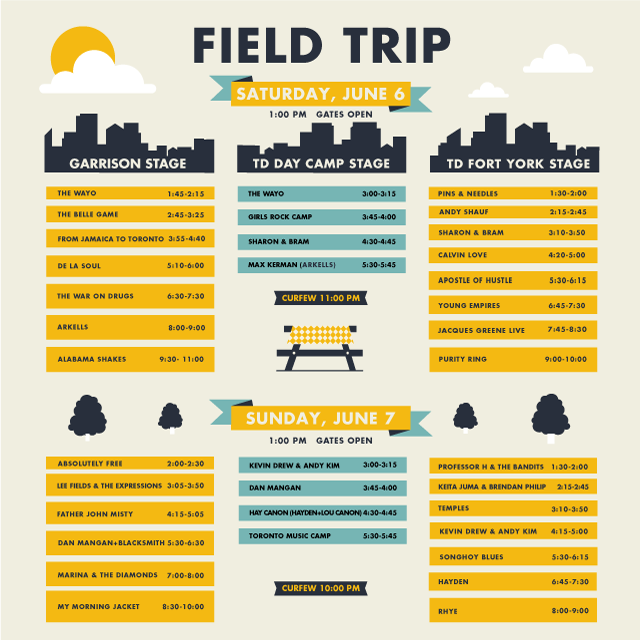 Field Trip 2015: A Look At What’s Happening At The Fort York Music Festival

Saturday, June 6 and Sunday, June 7, 2015 Toronto’s Historic Fort York & Garrison Common will once again be hosting the annual Arts And Crafts Field Trip. The two day festival will be highlighting some of the best in Toronto’s music, art, photography, fashion, technology, food, drink and much more.

The Juno award-winning Arts and Crafts, an independent record label, management firm, merchandiser, and publisher, was founded in 2003 by Kevin Drew (Broken Social Scene) and Jeffrey Remedios (former Virgin Records executive). A&C has since grown into one of Canada’s most important record labels. The first Field Trip, held in 2013, was created to celebrate Arts and Crafts’ tenth year of operation, and the festival is now finding itself in its third year.

This year, the headlining acts are none other than Grammy nominated Alabama Shakes, as well as My Morning Jacket. Other acts this year include Father John Misty, Juno Award-winning The Arkells, Dan Mangan + Blacksmith, Hayden and De La Soul. Broken Social Scene’s Kevin Drew will not be absent, however, as he will be performing with Andy Kim. The two have recently released an album collaboration together, It’s Decided. Children’s performers, Sharon and Bram, who recently lost their late member Lois Lilienstein, will be there as well. Polaris Music Prize nominees Purity Ring (short list) , as well as Rhye (long list) are among the long list of bands who will be performing.

“Field Trip is our annual love letter to our hometown. We work tirelessly to create a homegrown, internationally relevant and uniquely Toronto music and arts festival. I hope you will join us June 6th and 7th at Fort York and help us make this year’s special Field Trip moments the best yet.” – Jeffrey Remedios, Arts & Crafts President and Field Trip Co-Director.

Trish Melanson lives in the Toronto area with her three boys, Nicholas, Justin, and Eric, her dog Jakkson, and her cats Max and Jagger. She is the former host and producer of Canadian Kickass, a weekly two hour radio show on New Jersey's Chestnut Radio, showcasing Canadian Music. She is also a former Web Content Manager of Indie Soundscapes, an online showcase for Independent Music Artists Worldwide, and was a regular music contributor to The Stroumboulopouli. She is a fervent supporter of the Toronto live music scene. In a past life she was a teacher and Vice Principal in Durham Region. She has many more new and exciting projects waiting in the wings. ;)
RELATED ARTICLES
featuresfield trip