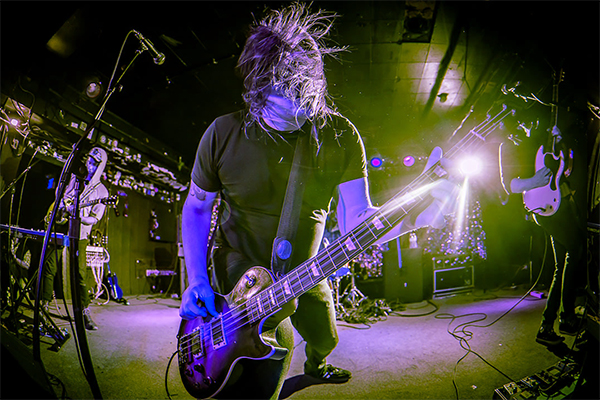 No Fame – No Fortune – Just Music:
An Interview With Nick Sewell Of Biblical

When the band name BIBLICAL is mentioned, there’s only a select few that know them despite having an enviable resume on the Canadian music scene since 2010. After running into Nick Sewell, formerly of Toronto heavyweight bands Tchort and The Illuminati, I asked him what he’s been up to lately. He quickly got me up to speed and said, “Check out BIBLICAL, we’re about to head out on tour with Death From Above 1979.” When I heard this I was certain Sewell once again had something killer on the go, so I did some research.

After checking out some links online and taking a good listen to their tracks I was immediately hooked on the band’s addictive brand of hard rock. BIBLICAL creates mammoth electricity with their songs and heavy hitting sound, leaving you hanging on every note. As the bio suggests, “BIBLICAL is the sound of mountains splitting and oceans parting.” I entirely agree with this statement. BIBLICAL is the perfect combination of retro and modern hard rock; they throw down HEAVY stoner metal jams and strategically weave them together with slower and powerful arrangements that command depth and respect. This band is certainly NOT one-dimensional or predictable; they surprise you at every turn as you make your way through their repertoire. While checking out their albumMonsoon Season, I immediately fell in love with the opening track “Second Sight,” a tune that opens with stadium-sized drums and trippy distorted guitars that get you thinking of Soundgarden and Faith No More. When comparing “Second Sight” to the epic closer, Monsoon Season, you hear the dynamic range of the music as it would have more Pink Floyd similarities, giving you a sense of the sonic journey BIBLICAL will take you on.

In a recent phone interview with Sewell, we ran through the evolution of the band and how they arrived where they are today. It all started in the Tchort days back in the late 90s while Sewell was still teamed up with Les Godfrey. Tchort disbanded to eventually form The Illuminati, a retro hard rock band where the boys would cut their teeth on a pro level of recording, touring and partying. After a five-year run with The Illuminati, they disbanded and Sewell eventually became friends with Sebastien Grainger of Death From Above 1979 from connections through a shared booking agent. With DFA on a break back in 2007, Sewell joined Sebastien with his solo project Sebastien Grainger and the Mountains and eventually did some local shows and tours of North America and Europe. After a stint with Grainger, DFA 1979 had to get back to work leaving Sewell without a band. Eventually he and some buddies started jamming for fun with no set goals in mind. After a few months, some very solid material started taking shape that eventually led to forming the almighty BIBLICAL.

Continuing the conversation with Sewell, I inquired about the new video for the song “Quiet Crooks,” a stunning MUST SEE video that is more of a short horror film then a typical music video. With an old world location as the backdrop, I asked if the video was shot in Montreal and he answered “No dude, we shot it in Rome, Italy. We applied for a grant, and got it.” This just added to the mystique and credibility of the video. Sean Wainsteim, a man with a diverse and decorated résumé who has a long list of documentary and commercial work to his credit, directed the video with technical and visionary perfection. Wainsteim was carefully chosen to embark on the ambitious project and pay proper tribute to legendary Italian horror film director Dario Argento. The video has an eerie look and feel, featuring a stunning Italian female actress who possesses what seems to be witchcraft powers and who claims several victims during the course of the story. I was curious why the band was not featured in the video for a single frame; Nick calmly answered, “being aversely proportional to my own screen time, I feel I can now enjoy the video for the rest of my life.”

With Nick’s humbleness, it’s no mystery why this band is just slightly under the radar and perhaps that’s how they like it. Nick does not seem like a guy who’s desperate for attention, but rather creating music for the love of it and to accomplish things that other bands may have not yet done on a creative level. The hunger for fame and fortune seems lost on the band, giving them more time to continue honing their craft on a first-rate level. It’s just a matter of time before BIBLICAL becomes a common name on the music scene; between their outstanding music, videos, and promotional artwork, and everything that is BIBLICAL, it would be criminal for them not to reach a much larger audience very soon. For fans of progressive hard rock and stoner metal, BIBLICAL is a must and I urge you to check them out immediately.

BIBLICAL is currently on a U.S. tour with Death From Above 1979. Tour dates can be found HERE.

Andre has been writing for The Spill Magazine for over 12 years, dating back to the print days. His passion for music goes far beyond writing reviews for new music and live concerts, he is also an active musician and producer on the Canadian music scene. Having toured North America and Europe with various acts, he is no stranger to dedication and work ethic new bands must endure to make the grade in today's market; Andre always delivers perspective writing that is authentic and to the point. Mr. Skinner typically covers indie rock, grass roots, electronica and is our resident hard rock and heavy metal specialist. He is extremely selective on what bands he covers for articles and you can rest assured they are ALWAYS band to watch with something left of centre to offer.
RELATED ARTICLES
features