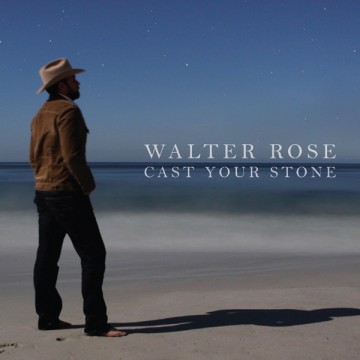 Lyrics that tell of life’s heartaches are a dime a dozen in Country music – or any genre for that matter – but their delivery doesn’t always feel authentic. One listen to Walter Rose’s debut album, Cast Your Stone, and you know he isn’t one of those clichés singing about achy-breaky-hearts – he’s the real deal. And if you don’t believe me, just ask Lucinda Williams. The Alt-country queen of raw emotion herself sings on this record, and her band – including former Son Volt member Eric Heywood – play on the album as well.
Although Rose describes Williams et al as his “dream band,” the road to recording this album wasn’t quite as sweet. Brain surgeries in his youth left him seizure-prone and blind in one eye. Then, in adulthood, his longtime girlfriend died in a motorcycle accident. The pain is almost palpable throughout the album, especially on the track “Driving South,” featuring Lucinda Williams. Both Rose and Williams sound like they are hanging on by a thread, and are trying desperately to prop each other up.

On “Wrecking Ball” Rose sounds like he has hit his bottom, confessing that he is “Tearing myself down/ Been wasting my days caught behind the bars/ I was never the man to save me from myself.” Rose’s voice is musky, yet drips like honey at the tail end of his lyrics, much like Alt-country peer, Jimmy Lafave.

With Heywood’s steel guitar and the rich, dense layering of guitar sounds throughout the album, anguish never sounded so good.
Cast Your Stone could be a soundtrack to life’s low points, but it also offers us a glimpse of what comes after the proverbial phoenix has risen up from the ashes – and it’s a sweet relief.