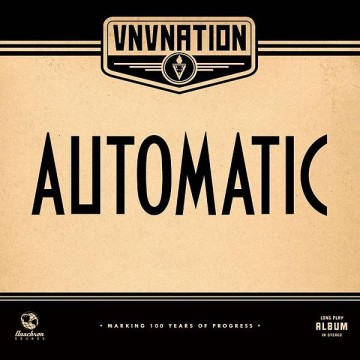 For their eighth studio album, Automatic, EBM outfit VNV Nation took a relaxed approach to things, emphasizing the more melodic aspects of the band’s signature sound. The band has said Automatic is probably their favorite release ever – but what band doesn’t say that of their newest release?

If you’d agree depends on whether you prefer VNV Nation’s more aggressive club tracks, or their more melodic Pop songs. If you prefer the softer side that they’ve previously shown in tracks like “Illusion” from 2007’s Judgement, you will adore Automatic, particularly the poppy “Space & Time.”

If you prefer those club stompers, you might be a little disappointed that there’s only one of those here, but that one track, “Control,” is killer with all the hooks and thumping beats and wicked synths you expect from VNV Nation. It would have been nice to have a couple more to balance the album out, though.

The main quibble is that some songs run too long, repeating choruses too many times. In particular, “Resolution” is lovely but you’ll find yourself looking at iTunes around the 4:30 mark thinking, “Huh, it’s not done yet?” when there’s still another 1:40 of nothing new to go.

All in all, Automatic is a pretty solid album, and I’m looking forward to hearing what the remixers can do with this new material.