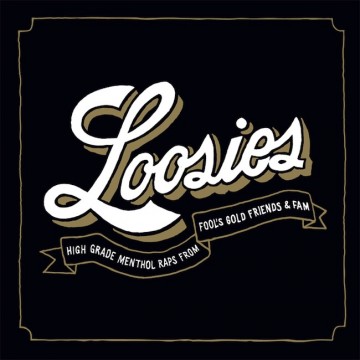 Who the hell is Fool’s Gold anyways? Fool’s Gold is a record label that was founded in 2007 in Brooklyn by DJs, A-Trak and Nick Catchdubs. Bridging the Hip-Hop and Electronic music and bringing forth renowned artists like Kid Cudi, Duck Sauce and Danny Brown, Fool’s Gold albums and parties are insanely popular among their fans. Danny Brown, Chase N Cashe, Freeway, Gita, Hongry and Droop-E just to name a few artists on the Loosies album.

This 22-track compilation album is great for variety and like most of their other releases, to learn about other artists and become familiar with their music. The best part is that the album also includes a 23rd track of a continuous DJ mix of the previous 22 tracks. The remix of “Piss Test,” though… it’s such a gimmicky song, but so catchy, by far going to be the fan favourite. However, it’s reliant on Trap music and the electronic components. “Tip Jar” is about bubble-butts, ass-clapping and drinking in a bar and being too broke to tip, I think? Another favourite though. Most of the tracks lack quality in the lyrical aspect, but the beats are great and the tracks are undeniably full of “douchebaggary” – but fun. The album overall is pretty raw.

The Spill Magazine is a Toronto-based online publication dedicated to covering the independent music scene with a strong focus on our thriving hometown talent. Our writers bring you up-to-date news, in-depth features on musicians and reviews for the latest CD releases. We also travel to the front lines for all local festivals including Canadian Music Week and North by Northeast. Don’t forget to check out our Facebook and Twitter pages for all daily Spill updates.
RELATED ARTICLES
album reviewsvarious artists
9.0