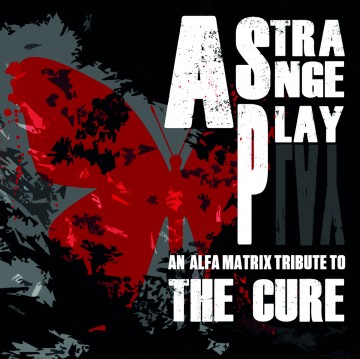 A Strange Play is a double-disc set containing 31 (33 if you get the Bandcamp version) covers of The Cure songs by almost as many electro, industrial, goth, and EBM artists. The tribute album was released this month on Belgium’s Alfa Matrix label.  Focusing on the Disintegration album (seven songs from this one) and earlier, these artists pay homage by giving their unique takes on the music that The Cure is known so well for.

All the songs respect their parent versions in that they stray, but not to the point of being unrecognizable.  About a third of the tracks are performed by female-fronted projects, which really adds a new perspective.  Most had an added industrial edge, some heavier than others.

The track listing favours early and mid-era The Cure. The bands later, poppier sound was represented in the likes of “Just Like Heaven,” “Friday I’m in Love,” and a few others, but they were heavily outnumbered by the likes of “Charlotte Sometimes,” “La Ment,” “All Cats are Grey,” and similar tracks which put The Cure in the dictionary under “melancholy.”

Reportedly, these recordings were all done in the space of about a year by numerous Alfa Matrix bands who wanted to pay tribute to The Cure’s dark legend.   Belgium’s Metroland did their take on “Close To Me,” switching the opening verse to spoken lines, each delivered by a different person with what sounded like very heavy English accents.  Norwegian duo Kant Kino contributed two tracks, “Jumping Someone Else’s Train” (which was very synth-heavy à la early-‘80s Devo), and “Charlotte Sometimes” (this version was very sped up which destroyed a lot of the song’s mystical quality, but it was an interesting take on it).  Lyrics, based on a book by Penelope Farmer, were performed by Mari Kattman, formerly of synthpop and EBM duo Day Twelve.  German duo Mari Chrome’s version of “A Forest” was similar – the original sentimental sound was altered based on the increased speed of the electronic music.  Italian/British two-piece Alien Vampires took on Seventeen Seconds’ “In Your House,” maintaining the same rhythm as the original but adding a lot of distortion to make the song their own.  Two bands took on “Burn,” the song written in 1994 for The Crow’s soundtrack.  Norwegian electro-rockers Essence of Mind took things up a notch and made the song a bit lighter and more sing-songy, while Italy’s Helalyn Flowers laid on the synthesizer sound.  “A Night Like This” from 1985’s Head on the Door, performed by XMH, presented with highly altered vocals, which led to the loss of Robert Smith’s vocal inflection but not the quality of the song.  “La Ment” was turned into something resembling a synth-powered pop ballad by Spanish electro-pop act Mondträume. They sped the song up considerably and their interpretation is reminiscent of the backing track to a video game.  Another one that seems like it should be in the video game arcade was the same album’s “The Baby Screams,” by Armageddon Dildos vs. Bezirk02. Belgian’s Star Industry added a strong industrial beat and electronic alteration to the vocals on 1983 single (later released on Japanese Whispers) “The Walk.”

Overall, the album is enjoyable.

Kathy Nichols, from the land of cheese and beer, has been writing off and on since elementary school. Her passions include hugging trees and trying to make a positive difference in the world, to which end she completed a degree in Mass Communications coupled with Environmental Science. Kathy appreciates all types of music, mainly industrial and punk and the like (especially bands who use their fame and fortune to try to make social or political statements), but with a little bit of Beastie Boys and Billie Holiday thrown in to switch things up a bit. She is the owner and CEO of www.industrialstrengthpublicity.com and enjoys long walks on the beach and (skinny) puppies.
RELATED ARTICLES
album reviewsvarious artists
6.0