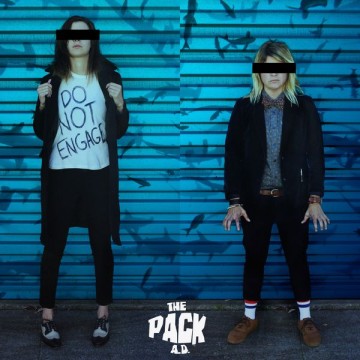 The Pack A.D.
Do Not Engage
Nettwerk Music Group

Look down, look away.
I am not responding to that.

Do not engage. We all know it. It’s that vibe you send out when you don’t want to engage in conversation in public, or respond to that nasty comment on social media. That is precisely what The Pack A.D.’s latest album is about. However, if you were trying to pin the anger or aloofness on songwriter/guitarist Becky Black, you’d be mistaken. Black writes her songs from the perspectives of the characters in her songs. What we have here is a collection of eleven of the raunchiest, rocking-est songs they have released to date.

Do Not Engage is the fifth studio album for the Vancouver duo, produced by Jim Diamond (White Stripes, Alice Cooper). Diamond also produced their fourth album, 2011’s Unpersons, resulting in a Juno nomination for Breakthrough Group Of The Year. They have been compared in the past to The Black Keys, The White Stripes and The Kills. Indeed, their sound to date has been a great mix of rock and blues, however this album sees them maturing into a much more sophisticated yet raunchier sound.

Black’s guitar and drummer Maya Miller’s beats come together with as much subtlety as an air raid siren. Together they form the perfect backdrop for Black’s vocals. Sometimes pleading, sometimes mocking, her vocals are always edgy and raunchy. This album isn’t meant to be pretty. From the drumbeats of “Airborne”, the beat and the pulse are relentless. “Animal”, “Creeping Jenny” and “Battering Ram” are rock-hard highlights here. “Loser” slows it down a little as a great ballad in character of a passive-aggressive loner. The final track, “Needles”, is a lulling, almost country-like ballad, with vocals that are gentle and haunting, leaving us wanting more.

If The Pack A.D.’s intent with this album was truly ‘Do Not Engage’, then they have failed terribly in their mission. Once you start this album, you are completely engaged from start to finish. You just can’t help yourself

Trish Melanson lives in the Toronto area with her three boys, Nicholas, Justin, and Eric, her dog Jakkson, and her cats Max and Jagger. She is the former host and producer of Canadian Kickass, a weekly two hour radio show on New Jersey's Chestnut Radio, showcasing Canadian Music. She is also a former Web Content Manager of Indie Soundscapes, an online showcase for Independent Music Artists Worldwide, and was a regular music contributor to The Stroumboulopouli. She is a fervent supporter of the Toronto live music scene. In a past life she was a teacher and Vice Principal in Durham Region. She has many more new and exciting projects waiting in the wings. ;)
RELATED ARTICLES
album reviewsthe pack a.d.
7.0