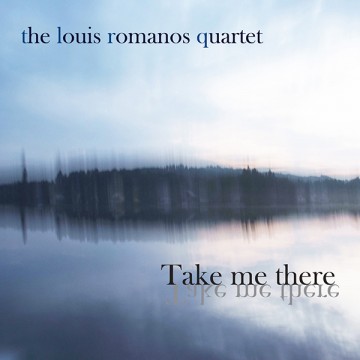 The Louis Romanos Quartet
Take Me There
Independent

Hailing from Athens, Georgia, drummer and composer Louis Romanos and his quartet perform 12 of Romanos’ compositions that focus on melody and group interplay more than instrumental prowess. There is a sense of rhythmic variety that ranges from the intense 7/4 grooves of the opening track “Songo,” the spirited and dancing “Klezmer,” right to the pensive and thoughtful qualities of tracks such as “Far Away” and “Spiritual.”

Louis Romanos is a strong composer who has a solid sense of melody, rhythm, and variance from tune to tune. It helps to have a supporting cast involving trumpeter Alex Noppe, guitarist Dan Sumner and bassist Neal Starkey. They’ve become a cohesive, well-led unit that enable Louis’ creations to come to life, unfolding as a story with succinct chapters waiting to be revealed from page to page (or track to track in this case).

It can be a real artistic risk for an up-and-coming jazz band to release only original music; it would have helped to engage the listener with a familiar cover or two to draw them into the music. The disc could use more swing numbers to showcase what the band can do with their musical instruments.

The compositions tell musical stories that leave it open to listener interpretation. Upon first listen, the interplay between the musicians gives the impression of a band with one united mind to convey a message with each piece. “Take Me There” is a fine debut by a talented drummer, composer, and bandleader that will help him make inroads in the jazz scene of today.

Conrad Gayle is a jazz pianist, composer, and writer. He released three albums, "Genesis EP", "Foundations" and "The Live Sessions 09/10", his first book "The Real Conrad Black", has an active YouTube channel and maintains his own blog site called "The Conrad Gayle Review". He is a graduate from York University with a degree in sociology. He is also active in the city of Toronto as a solo artist and leader of his own trio, as well as being the regular pianist in his home church. He has written for the Spill Magazine for over four years and is planning on continuing the course to become a very successful writer.
RELATED ARTICLES
album reviews
9.0