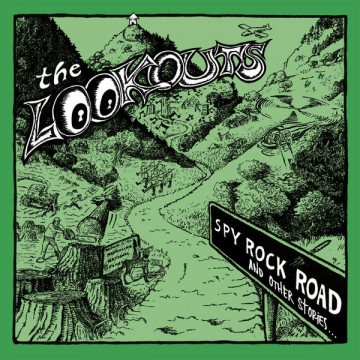 Thirty years before anyone would ever even conceive of Green Day, three guys got together and The Lookouts were born. The California punk band released a remastered album March 10 titled Spy Rock Road (and other stories). This new collection features the original album and a collection of tracks from their other albums, EPs, and never-before-heard demos.

Together with bassist (and, quite oddly, future forest ranger) Kain Kong, and with guest appearances by Tim Armstrong ( Rancid, Operation Ivy) and Green Day’s Billie Joe Armstrong, The Lookouts produced a legacy of two albums, two EPs, and several compilation tracks, the best of which are featured here. Also included is a track from The Lookouts’ first demo tape, recorded in 1985, which features (now) Grammy Award winner Tré Cool singing backups in his as yet unbroken three-and-a-half-octave soprano. At the time, Tré was only 12 years old and already a drumming master.

Spy Rock Road (and other stories) is a 24-song anthology, which opens with three tracks featuring Armstrong on guitar and backing vocals. The music alternates between mild to hardcore punk as the tempo speeds up, and the lyrics are simple, yet not as adolescent as some of the band members. Were The Lookouts ahead of their time? Would they have had a longer run than their five years, had they formed five years later? Perhaps. As we now know, the musicians certainly possessed the skills to go far. Will you add each song to your ‘favorites’ playlist on your iPod? Probably not, but for avid Rancid and Green Day fans it’s fun for the sake of history.

The best song on the album is “Story,” and, as story has it, this song was the first time Cool and Armstrong played together, eventually leaving the Lookouts to come together as original Green Day members.

Lucy Rendler-Kaplan is a native Chicagoan, recently returning home after 10 years in Los Angeles. Having worked in field marketing for the past 17 years, Lucy recently left corporate America to work as a consultant. When not running, Lucy can most often be found out with her dog, watching an NFL game, or listening to live local music. Passionate about writing, Lucy enjoys writing about music in lieu of playing it.
RELATED ARTICLES
album reviews
6.0