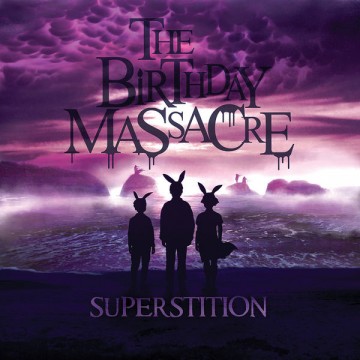 Superstition, The Birthday Massacre’s sixth and most recent studio album, showcases the band’s talent in a range of music presented in tracks ranging from industrialized dance to gothy, electronic, atmospheric, and guitar-laden tunes.

The album was enjoyable in its entirety. Not meaning to slight the musical crew in any way (Falcore and Rainbow on guitars, Owen on synths, Nate on bass, and Rhim on drums), but Chibi’s vocals are definitely the strongest asset here.  The weakest link would be the dark, creepy vocals that come in about three-quarters of the way through “Divide” and then again in “Destroyer.”  They’re just a little too dark, but perhaps those who tend more toward the Gothic scene would really think they add something.

The Canadian (currently located in Toronto, started in London, Ontario in 1999) six-piece released Superstition on Metropolis Records last month (November) on CD as well as a limited edition vinyl in conjunction with a tour.

“Divide” begins the album in its industrial, yet dancey style.  The instruments complement one another and the track flows well. The slower, slightly darker sound of “Diaries” continues the dancey feel and adds a gothy element.  Carrying on through the album, it should be noted that the heavy guitar sound on many tracks saves The Birthday Massacre from falling into the category of electronica.  Track six, “Oceania,” is a bit reminiscent of early Depeche Mode, later moving to up-tempo “Beyond” with its atmospheric keyboards.

Overall, the listening experience was appreciated and I’d recommend the album to The Birthday Massacre fans new and old as well as those who’ve never listened to them before.

Kathy Nichols, from the land of cheese and beer, has been writing off and on since elementary school. Her passions include hugging trees and trying to make a positive difference in the world, to which end she completed a degree in Mass Communications coupled with Environmental Science. Kathy appreciates all types of music, mainly industrial and punk and the like (especially bands who use their fame and fortune to try to make social or political statements), but with a little bit of Beastie Boys and Billie Holiday thrown in to switch things up a bit. She is the owner and CEO of www.industrialstrengthpublicity.com and enjoys long walks on the beach and (skinny) puppies.
RELATED ARTICLES
album reviewssuperstitionthe birthday massacre
6.0