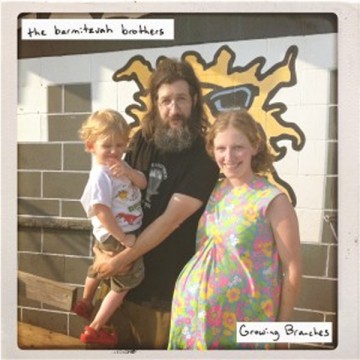 Reading the inside jacket of The Barmitzvah Brothers’ new album, Growing Branches, was enough to pique my interest and get me excited about this album. It talks about how the imminent birth of singer Jenny Mitchell’s baby inspired her to ‘do something special,’ and thus the band got together after a ten-year hiatus and recorded Growing Branches. As the title suggests, the album’s primary themes revolve around family and birth, and the band explore these themes in a way that adheres to their reputation for capturing a personal experience of everyday life. For Mitchell, the everyday involves watching her family grow, dreaming about the future of her kids, and feeling for kicks in her stomach. The band supports the cutesy lyrics with poppy, dream-like music that suits the lyrics really well, making the songs sound like an Indie take on the blithe music heard on children’s television programs.

Although I grew tired of the songs as the album progressed, and almost passed it off as being too juvenile, I was still able to appreciate the album’s finest quality which is in capturing the honest emotions that was clearly being felt by the band, particularly Jenny Mitchell, while writing the songs for Growing Branches. When listening to tracks like “Theoretical Love Song Part 2,” “Lovely Lines,” and “All the Things You’ll Need,” the excitement and expectations of an imminent birth are expressed beautifully. Being able to express the everyday emotions almost effortlessly is what makes The Barmitzvah Brothers’ Growing Branches a fun album that is worth checking out.