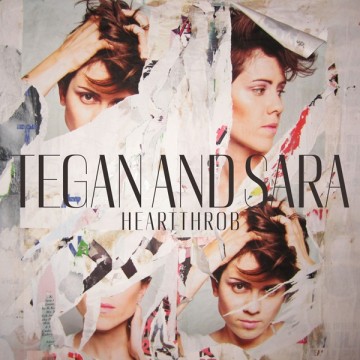 By now Tegan and Sara are what you could call ‘seasoned veterans’ on Canada’s Indie scene. Their first album, Under Feet Like Ours, debuted in 1999 and the identical twins have played at festivals like Coachella, The Winnipeg Folk Festival, SXSW, and have toured with prolific artists such as Neil Young, Death Cab for Cutie, and Weezer, making them a staple of the worldwide music scene.

However, their latest record, Heartthrob, marks a drastic shift from their usual sound. Gone are the folksy songs and crooning acoustic tracks. Heartthrob exposes twin duo as fully developed artists. It boasts the kinds of catchy lyrics that audiences have come to expect, but without any of the slower, Folk-pace of their earlier albums. It’s almost like a slap in the face. A bold, glorious, synthy slap in the face.

Once the record begins it doesn’t quit. Moving through familiar themes of heartbreak and attraction with tracks like “I Couldn’t Be Your Friend,” “How Come You Don’t Want Me” and “Closer,” the quality of their lyrics, as with all their albums, shines. Only with this album the words are accompanied by tons of synth, drum machines, and a decidedly more mature tone as evidenced in the slower tracks “Now I’m All Messed Up” and in “I’m Not Your Hero.”

The record as a whole feels tailored to a wider audience, and “Closer” is already on rotation on CBC Radio 3 and will likely leak into more local stations as more singles are released. Diehard Tegan and Sara fans will argue that the girls have gone mainstream, and it’s a legitimate observation.

With that said, they do a damn fine job of it.

Alyson is a writer, content marketer and social media manager in Winnipeg, Manitoba. She holds a Bachelor of Arts in Rhetoric & Communications from the University of Winnipeg and runs her own business providing businesses and individuals with copyrighting services, and content marketing strategies and management. When not online she can be found gardening, riding her bike or sipping fancy coffee.
RELATED ARTICLES
album reviewstegan and sara
7.0