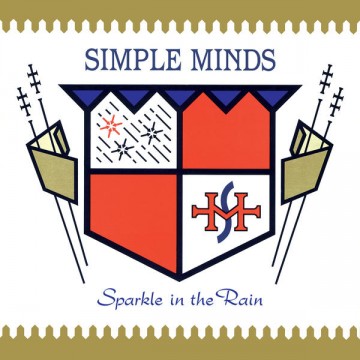 “Don’t You Forget About Me”….wasn’t that the song from the John Hughes movie? Yeah it was and it’s still probably the most well known song associated with the Scottish quintet Simple Minds, even though the group never wrote it. I still remember lead singer Jim Kerr’s disdain for the song when it first came out: “Would I ever write about vanity and security?” Simple Minds was an important group already in the new wave era in the 1980s and the reissue of Sparkle in the Rain confirms that.

Originally released in 1984, the songs from Sparkle still sound bold and powerful. “Waterfront,” “Up on the Catwalk,” and “Speed Your Love to Me” are staples of Simple Minds’ music catalogue and the reissue of Sparkle includes a number of remixes of these songs. The multi-disc set also provides live versions of these three as well as live highlights from previous albums New Gold Dream and Sons and Fascination. The live recordings came from a Barrowland Ballroom concert in Glasgow, U.K. in 1984 and it’s easy to see how the works of Simple Minds would translate well in any arena or stadium setting.

Don’t you forget that there is so much more to Simple Minds. They’re still alive and kicking and touring in support of their new album, Big Music.

An educator who also tries to introduce others to great music. It's a never ending job.
RELATED ARTICLES
album reviewssimple minds
9.0