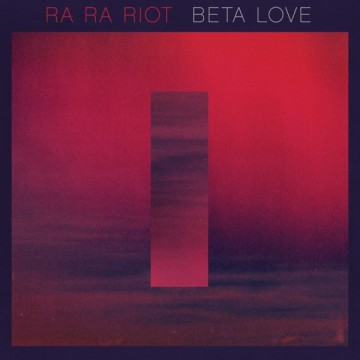 Ra Ra Riot’s debut LP, The Rhumb Line (2008), opened with a few bars of cello. Shortly thereafter a plucked violin string, followed by persistent snare. That track, “Ghost Under Rocks,” grabbed our shirt-collars and demanded attention, even before the catchy hook. Ra Ra Riot has always had a keen ear for a Pop melody. They stood out because they aspired to more than just an Indie-pop band. Even the lesser tracks on The Rhumb Line and their 2010 follow-up The Orchard showcased a remarkable blend of musicality and Pop orchestration. It wasn’t just that they lent depth with string instruments, it’s that the strings didn’t eclipse or oppose the melody.

In creating Beta Love, Ra Ra Riot has clearly been watching a lot of VH1 Classic. Contained within are bits of The Pet Shop Boys, A-Ha, Erasure, only busier. The ever-present strings that provided a background to their best tracks (and given the band their identity as the “Indie band with orchestral strings”) have been downsized and largely replaced by keyboards and glitchy synthmania. (Some of this speaks to the departure of cellist Alexandra Lawn.) The album opens with “Dance With Me,” a bouncy Dance-track that emphasizes the refrain, bigger beats and brevity. It’s catchy, but like most modern Pop songs it comes and it goes, leaving little impression other than it’s immediate desire to induce a little rump shaking. “Binary Mind” relies on synth and machine-gun drums. Wes Miles’ vocals are forced to carry these artificial tracks. And carry he does, with panache. There’s a moment in “Binary Mind” when the synth swells and the strings finally answer the call to arms and Miles’ static cadence shifts. Ra Ra Riot finds a groove, a telling promise of more, and then the song ends abruptly, before it has a chance to become something more than overwrought and self-aware.

Thankfully, this early bombast settles into a rapid-fire (no track on the album eclipses 3:13) sequence of more varied and occasionally successful transgressions, even if they fail to really provide the necessary anchor. “Angel, Please” reminds of mid-career Phil Collins, and “For Once” might have been originally been a too-poppy Alphaville B-side. Beta Love succeeds when it gravitates back toward the pigeonhole Ra Ra Riot wanted to escape. “Is It Too Much” focuses on the individual elements alongside a slice of stripped-down artificiality: a piano melody, Rebecca Zeller’s luscious strings the backbone.

The album’s singular peak, the haunting “When I Dream” departs entirely from overzealous gusto in favor of minimalism. This is the middle ground, the sweet spot that Ra Ra Riot overshot with enviable gusto. “Dream” has a human heartbeat, the thumping drums a background pulse filling in the gaps between isolated piano, finger snaps and strings. The track appears at just the right time to redeem an album cluttered with grand ideas, ambition and a constant lack of restraint.

In “Beta Love,” Miles sings “I might be a prototype but we’re both real inside.” It speaks to the band’s latest direction, a direction they are still testing out. A departure from their pre-established “Chamber Pop” condition was clearly necessary. The band needed to evolve, but Beta Love comes across as a burst-dam, the reaction of a child who’d been holed up in church for an hour too long. At first taste of freedom, all of that energy comes flooding out. Ra Ra Riot has more to give. What Beta Love offers is the assurance that they’re still invigorated at the thought of making more music. Now, they need to channel this pent up energy to find that middle-ground perfection that only appears on Beta Love with frustrating irregularity.

James David Patrick has a B.A. in film studies from Emory University, an M.F.A in Creative Writing from the University of Southern Maine, and an honorary Ph.D. in bullshitting about everything else from the College of Two Pints. His fiction and non-fiction has appeared in PANK, Monkeybicycle, Squalorly, Specter Lit, and Bartleby Snopes among other wordy magazines. While he does not like to brag (much), he has interviewed Tom Hanks and is pretty sure you haven't. He bl-gs about music, movies, and nostalgia at thirtyhertzrumble.com and runs the James Bond Social Media Project at thejamesbondsocialmediaproject.com. James lives in Pittsburgh, PA.
RELATED ARTICLES
album reviewsra ra riot
9.0