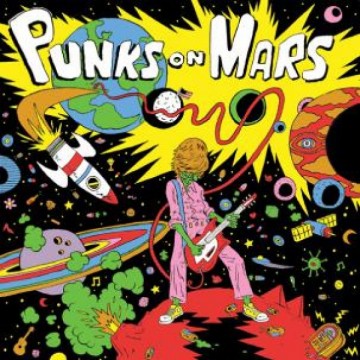 Starting the 14-track (or, 28-minute) album off with a very mystical and outer-space-like sound, definitely gave a dramatic feel for what to expect on the rest of the album. Punks on Mars’ Bad Expectations didn’t quite meet expectations. The entire album sounded like it was meant to be background music in some sort of mystical creature video game, perhaps Zelda. Case in point, “The Sad Toy” really made me want to throw this album out the window, literally. Sitting through an entire song led to thoughts of the Smurfs, Tetris, Super Smash Bros and N64 games. On the other hand, there are a few exceptions for catchy and decent songs like “She’s a Glitterpunk,” and “Victoria’s World,” which sounded more up to par and mature. Though, you have to give it to Punks on Mars for bringing back some of that ’80s fun and free spirited feel and guitar riffing. The album artwork is great and very fitting to the name ‘Punks on Mars’ as well as their sound. Outerspace, super-galactic aliens and UFOs are the dominant images with Punks on Mars and have been on previous albums as well. You can look at this album in two ways; like wine, an acquired taste; or a shot of tequila, short and harsh.