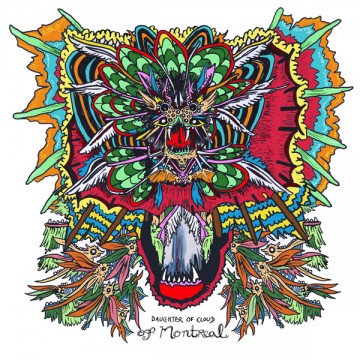 At its best, Daughter of Cloud is a compilation album for the diehard Of Montreal fan consisting of a staggering 17 tracks of unreleased cuts and rarities. At its worst, it’s an effort by the band to reconnect with an audience that seems to be slipping by releasing tracks that didn’t quite make the cut the first time around.

What the album does offer is a reminder of the talent possessed by lead songwriter Kevin Barnes through songs like “Our Love is Senile” and the poppy “Micro University.” In particular, the song “Noir Blues to Tinnitus” stands out with stunning instrumentals. A few other tracks worth noting are “Feminine Effects” and “Psychotic Feeling,” though the album begins to feel too complicated with the insertion of songs like “Steppin Out” and “Obviousatonicnuncio.”

Daughter of Cloud, though a worthwhile album in the sense that is showcases some of Barnes’ earlier, perhaps more accessible, talent, in the end feels too dragged-out and more like an attempt to pull back fans who may have wandered away from all the weirdness.

Alyson is a writer, content marketer and social media manager in Winnipeg, Manitoba. She holds a Bachelor of Arts in Rhetoric & Communications from the University of Winnipeg and runs her own business providing businesses and individuals with copyrighting services, and content marketing strategies and management. When not online she can be found gardening, riding her bike or sipping fancy coffee.
RELATED ARTICLES
album reviewsof montreal
7.0