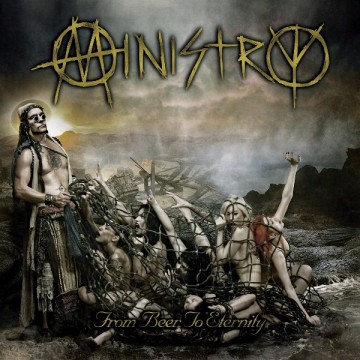 After a break-up lasting a few years, industrial metal band Ministry re-emerged with their latest album From Beer to Eternity, declaring itself the ultimate Ministry comeback. Front man Al Jourgensen’s harsh vocals and heavy guitar riffs contrast with the catchy drumming and groovy bass lines on the album. The unsettling intro entitled “Hail To His Majesty” contains what could be trance-inducing properties if it weren’t for the aggressive expulsions of profanity and bass drum kicks. The second track, “Punch in the Face”, stands true to its title as well as Ministry’s roots by delivering a fast-paced, anger-fueled discharge – a true moshing theme song. The heavy riffing is consistent through the entire song and feels no need to alter itself.

Each track can be labeled as stand-alone tracks, as they each have a different feel than the next. As with all other work crafted by Ministry, the album features various politically themed vocal samples. This is very noticeable in the track titled “The Horror” as an accentuation to the groovy drum and bass allocation. As soon as this low-end, mellow track finishes, the album picks up the pace with “Side FX Include Mikey’s Middle Finger”. This is a key track that really delivers a full on industrial infused metal assault equipped with extremely short yet intense guitar solos, which then climax with a series of sporadic auditory projections (leaving you slightly disturbed). The newly released single “PermaWar” does not seem to stand up to the intensity and craftsmanship that most of the other key tracks bring, but may be the first single because it’s more accessible to a broader audience.

In its entirety, the album presents itself as a comprehensive work of anarchical resonance. It’s an epic finale to the long tenure the band has established throughout their career.