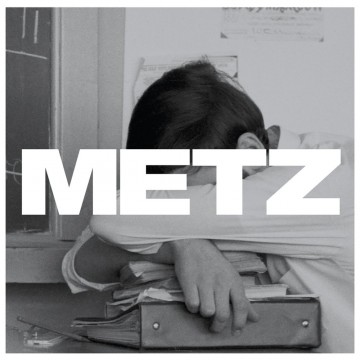 I delayed writing about METZ’s self-titled debut to try and avoid getting swept up in the hype. Many people, whose opinions I trust, love the band and the critical acclaim seemed overwhelming since their signing to Sub Pop.

Upon repeated listens, it’s obvious that METZ have firmly entrenched themselves at the top of the current heap of Noise-Rock bands. The songwriting is decent, but that’s not the point for a band like METZ. The songs are merely vehicles for raw energy and emotion, and while the vocals yowl and scream with the best of them, the fuzzed out production does sand some of the grit off of them, leaving the guitars to provide most of the muscle.

The guitars continually chew and stretch riffs penetrating your skull at the base and reaching down to your stomach. Like a tension cable yanking your jaw clenched, and pulling your stomach into your lungs they will leave you energized, anxious and nauseas. It’s a powerful mix that’s not for the faint of heart, and is most effective in shorter bursts. The easiest comparison is to Jesus Lizard and that’s accurate, but the sound is more fuzzed out like an early Stooges style that’s so prevalent the last few years. This could date the record in a few years, but it’s a minor quibble considering the emotional punch this band packs. They definitely live up to the hype.

The Spill Magazine is a Toronto-based online publication dedicated to covering the independent music scene with a strong focus on our thriving hometown talent. Our writers bring you up-to-date news, in-depth features on musicians and reviews for the latest CD releases. We also travel to the front lines for all local festivals including Canadian Music Week and North by Northeast. Don’t forget to check out our Facebook and Twitter pages for all daily Spill updates.
RELATED ARTICLES
album reviewsmetz
10