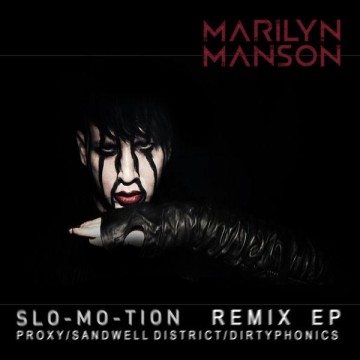 Canadian-based Dine Alone Records presents us with a six-track remix EP of Marilyn Manson’s single “Slo-Mo-Tion,” a song originally marked as the second single from Manson’s Born Villain album released earlier this year. This newly forged EP takes the ominous track to suitably bizarre levels of obscurity. Manson and his legions manage to dispense some fresh and modernized takes on the single, and the remixes coupled with the original make for fair crowd-pleasing DJ-fodder.

Russian Hardcore-Electro artist Proxy takes the reins on two of the remixes on the EP, immersing his own brand of grit-infused Techno into each revamp. Unmistakably shadowy through its drawn-out bassline and offbeat drive, each of Proxy’s jostled adaptations respects the single enough to still allow for Manson’s originality to seep through. Sandwell District, an ‘infamous’ underground Techno label, throttle “Slo-Mo-Tion” with a Dubstep downplay and a self-titled remix that each mellow the track into bass-driven murkiness. The Sandwell District remixes flow along well enough – but at times a bit too well and to the point that their second remix comes off as an off-centered extension of the first. Dirtyphonics apply an up-tempo rhythm to the single that removes the significance of the single’s actual ‘slow-motion’ tonality – but the new track works well enough through its all-out Techno delivery. Landing the EP is the album version of the single, and the fittingness here is that only Manson and his trademark musical bleakness can manage to successfully anchor such a assorted collection of remixes.

Marilyn Manson’s “Slo-Mo-Tion” harbours just the right amount of despair and cynicism that we have come to expect from the artist. The three talents behind the remakes modestly highlight what Manson has deemed as being his musical ‘message’. It’ll be up to the die-hard fans (and skeptics as well) to choose whether this vehicle is one that represents Manson justly, or if it’s simply a hodgepodge delivery of the same obscure message. Either way, this array of remakes will no doubt make it into the milk-crates and playlists of DJs in and out of the Underground music scene. With so many genres at work trying to make Manson more accessible to the masses you’ll be hard-pressed not to find something with a sense of appeal.

This Toronto-based artist has worked as a photographer, graphic designer, web designer and motion-graphics designer for the better part of ten years. His love of music both old and new shines brightly through his dedication to The Spill Magazine as Editor and Creative Director.
RELATED ARTICLES
album reviewsmarilyn manson
10