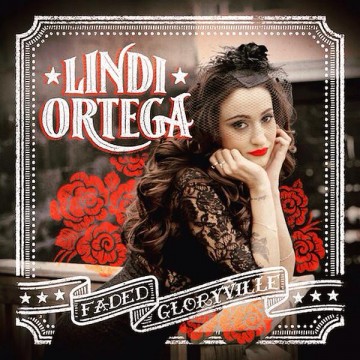 It looks like August promises to be a scorcher, and certainly the best month of the whole summer. It promises to be glorious because our very own Canadian Tin Star, Miss Lindi Ortega, is treating the world to a whole new set of songs in Faded Gloryville, her fourth studio release, on Last Gang Records.

The songs and performances feel very organic and rich. They’re the fruit of a long musical journey filled with constant touring, joy, humour, a dash of Johnny Cash, and of course plenty of broken hearts.

The album was recorded in three separate sessions with several talented and recognized producers like Dave Cobb (Shooter Jennings), Colin Linden (T Bone Burnett), Ben Tanner (Alabama Shakes), and John Paul White (The Civil Wars). Together through all the individual sessions, although very different in vision and direction, they managed to capture Ortega’s hauntingly beautiful voice and organic strength, which truly flourishes in her live performances.

She is gaining great support and momentum since Little Red Boots and Cigarettes & Truckstops. Her third release, Tin Star,won her the Canadian Country Music Award for Roots Artist of the Year. There’s no telling what Faded Gloryville will bring, but those who have taken the time to examine her soulful lyrics or listen and read an interview, know that it’s not about the accolades, it’s about a soulful young woman expressing herself through song, hoping that others find a little piece of themselves in the art she so painstakingly creates.

Faded Gloryville represents a state of mind, according to her official release. “It is a dark, dreary town that looms on the near horizon, infinitely closer than the far-off destination we’re trying to reach. Most weary travelers pull their cars into Faded Gloryville and stay awhile… some are willing to dust themselves off and leave town in the morning.”

This album is about heartache and hope. It is a deep philosophical treatise on not becoming stuck in a prison of our own making. This is not self-help book, doomed to failure, promising things that will never come, and only driving the weary traveler into deeper despair; Faded Gloryville is a collection of wonderful songs reflecting on dreams and nightmares. It is a hopeful journey that dreams of a new tomorrow.

Grzegorz Kieszkowski originally hails from Bydgoszcz, Poland. After his father was released from prison in 1984, for his involvement with the Solidarity movement, Greg and his family escaped to Canada in 1985. He makes Cobourg his home, along with his wife and two small children. Greg is a graduate of York University, with a double major in English and Philosophy. Music has always been in his blood, and although his tastes have matured, he will always have a soft spot for the Metal days of the late 1980’s. He is a full time English teacher and a professional photographer. Part of the allure of writing is the possibility of conversation, and he would love to hear your comments and opinions. Please feel free to visit his personal website - grzegorzkieszkowski.com.
RELATED ARTICLES
album reviewslindi ortega
10